Recent film festivals in Portugal and Canada highlight this year’s cinematic exchange between the two countries.

The 2017 edition of the European Union Film Festival in Toronto includes the Canadian premiere of Saint George (São Jorge). The troika bailout measures that affected Portugal in the 2010s plays out in Saint George with the story of Jorge, a boxer who becomes a debt collector in an attempt to prevent his wife and their child from leaving the country.

This is the latest film directed by Marco Martins, who has garnered increasing attention for his work since his first feature film, Alice (2005). Alice received a number of international awards, including wins at the Cannes Film Festival in 2005. 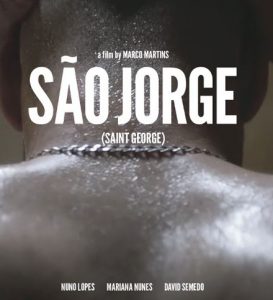 Saint George premiered at the Venice Film Festival in 2016, with lead actor Nuno Lopes winning a Best Actor award in the Horizons (Orizzonti) section. It is Portugal’s entry for Best Foreign Language Film at the 90th Academy Awards in the United States. It is also the country’s submission for the 2018 Goya Awards (los Premios Goya), Spain’s principal film awards.

Following the Toronto screening, the film will be shown in Vancouver and Ottawa.

Canadian cinema is also in focus at film festivals in Portugal. David Cronenberg is part of this year’s LEFFEST’17: Lisbon & Sintra Film Festival. The Canadian filmmaker, author and actor is part of the Competition jury for the festival. LEFFEST’17 runs November 17-26, 2017 in Lisbon and Sintra.

Canadian films recently represented at festivals in Portugal includes Yan England’s debut feature 1:54, which focusses on the sports world, teenage bullying and issues of sexuality. It was screened during Closing Night at Queer Porto 3 in early October.

The European Union Film Festival (EUFF) is a festival series that screens contemporary European films. In Canada, the festival runs in Ottawa, Toronto, Quebec City and Vancouver. It forms part of the EU’s public diplomacy activities in Canada. The festival series was founded in Ottawa in 1984.