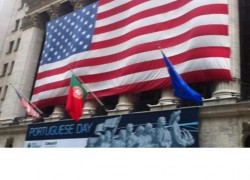 AICEP Portugal Global, Trade & Investment Agency is promoting the second edition of the “Festival of Creativity, Culture and Business,” taking place during the month of June in New York City.

Organized by “Meet Portugal in New York,” the festival includes a series of events, showcasing the best Portugal has to offer, as part of the global campaign “Portugal, Innovate with us” aimed to promoting Portuguese culture, products and services abroad.

The festival will feature an array of cultural, economic and artistic events, including architecture, sports and entertainment, cuisine and wine, literature and cinema, and business networking.

The highlight of the festival is June 10, Portugal National Day, a Portuguese national holiday dedicated to honoring the life of Luís de Camões, Portugal’s national poet who died on the 10th of June 1580. Camões wrote Os Lusiadas, Portugal’s national epic poem celebrating the country’s 16th century maritime achievements. For the Portuguese people living abroad, the date is also the time to showcase their heritage and ethnic pride.

Another highlight of the festival is the Portugal Day New York Marathon, taking place in Central Park, on June 16. Promoted by the Portuguese Circle, the event is co-sponsored by NYRR (New York Road Runners). Last year, the 5 mile long race attracted over 10 thousand runners.

Established in 2007, AICEP Portugal Global is a government business entity dedicated to the globalization of Portuguese companies and to attracting foreign investment to Portugal. Its ultimate goal is to promote a competitive business environment that stimulates the international expansion of Portugal’s economy.

JUNE 13/14 “Portugal Innovate with us”, at the NExt Expo,  by AICEP, www.northsidefestival.com/

JUNE 24 “Taste of Lisbon – join Esporão Wines on its 40th Anniversary”, at the Delancey Rooftop, www.esporao.com

JUNE 26 “Jewish Heritage and Portugal”, at the Spanish and Portuguese Synagogue, www.shearithisrael.org

For further information log on to >>  Meet Portugal in New York >>