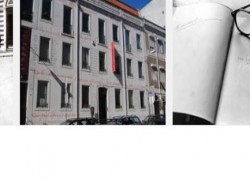 Lisbon is marking the 125th anniversary of the birth of Fernando Pessoa with the “First Festival Desassossego” taking place in Casa Fernando Pessoa, the last home where Portugal’s renowned modernist poet lived.

Co-sponsored by the Embassy of Brazil in Portugal, organizers described the three-day festival as “a meeting of Portuguese-Brazilian poetry,” with the participation of leading Portuguese and Brazilian literary personalities.

The event opened Tuesday, with a screening of the Brazilian film, “Pessoa, Pessoas.”   The book Fernando Pessoa & Ofélia Queiroz, by Richard Zenith, Pessoa’s translator and the winner of last year’s Pessoa Prize, will be officially launched during the festival.

Visitors will be able to view 1,317 volumes belonging to a virtual collection of a total of 337,187 digitalized pages and 2,089 files available for free download.

In addition to access books, which can be searched by author, year, alphabetical or thematic categories, visitors will be able to read Pessoa’s annotations on the margins of many pages, poems, texts and notes.

Born in Lisbon, on June 13, 1888, Fernando Pessoa was a poet and writer who created a multitude of literary personalities, he called “heteronyms,” with distinct personalities, biographies, occupations and literary styles. His heteronyms sometimes quoted and interacted with each other and other people. At the time of his death in 1935, at the age of 47, his work was not widely known. His reputation as a major literary figure in twentieth-century literature has grown posthumously.