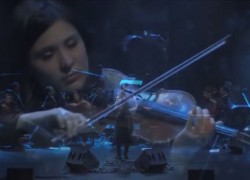 The festival, highlighting the “many cultures that comprise the Portuguese- and Spanish-speaking peoples,” includes dozens of performances by some of the world’s best artists of contemporary music, dance and theater with presentations in visual arts, exhibitions, installations and multiple cultural events focusing on literature, film, and cuisine.

Other highlights include music performances by composer Rodrigo Leão, fado vocalist António Zambujo, rock band ‘The Gift’, jazz singer Sofia Ribeiro and by composer and performer Luisa Sobral. Concerts are free and open to the public. An educational space will be provided for children to interact with aspects of the Iberian cultures.

The Arte Institute is a non-profit organization that promotes the Portuguese art and culture and offers a creative environment for Portuguese artists in the areas of visual arts, literature, music, dance and film. The goal is to foster inter-cultural innovative dialogues between the New York artistic community and Portuguese artists.