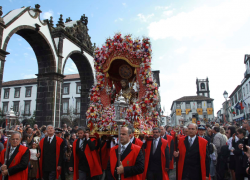 The 2015 Festas do Senhor Santo Cristo dos Milagres, [Holy Feast of Christ of the Miracles], taking place on the weekend of May 7-14, in Ponta Delgada, São Miguel, Azores, will streamed live online on the Internet and live on television through RTP/ Antena 1.

According to the ‘2015 Festivities Program’ the religious celebrations will be presided by special guest, D. Francisco José Senra de Faria Coelho, Auxiliary Bishop of the Braga Diocese, mainland Portugal.

According the organizers, on May 8 viewers around the world will be able to watch the Santuário da Esperança illuminations and the Campo de S. Francisco traditional evening event; on May 9, viewers will be able to see the Procissão da Mudança and the outdoor Mass; and on May 10, the traditional main procession will be broadcast live online. In the past year, over 40,000 people around the world followed the festivities online over the Internet.

Nearly 400 years old, the Festas do Senhor Santo Cristo dos Milagres [Holy Feast of Christ of the Miracles], is the largest religious celebration of the Azores. The tradition attracts many thousands of Azorean pilgrims returning home for the event.

To watch the Festas do Senhor Santo Cristo dos Milagres (in Portuguese) log on to the Festas Website or live broadcast on RTP/Antena 1.