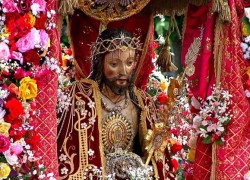 The 2016 Festas do Senhor Santo Cristo dos Milagres, [Holy Feast of Christ of the Miracles], are taking place on the weekend of April 26 through May 5, in Ponta Delgada, São Miguel, Azores.

Highlights of the celebrations will be streamed live online on the Internet and live on television through RTP/A . In the past years, over 40,000 people around the world followed the festivities online over the Internet.

According to the “2016 Festivities Program”, D. João Lavrador, the newly appointed coadjutor Bishop of the Angra do Heroísmo Diocese, (Terceira) will preside to the religious celebrations.

A native of Coimbra, mainland Portugal, Bishop Lavrador, 60, was appointed the 39th Bishop Angra do Heroísmo, on November 29, 2015, replacing D. António de Sousa Braga who retired last March at the age of 75.

According the organizers, religious and secular celebrations are scheduled for April 26, 27, and 28 at the Santuário da Esperança area, including a farewell sermon by outgoing Bishop D. António de Sousa Braga.

On Friday, April 29, religious and secular ceremonies are scheduled for the day. Viewers around the world will be able to watch the lightning of the Santuário da Esperança illuminations and the Campo de S. Francisco where most of the traditional festivities take place.

On April 30, viewers will be able to watch the Procissão da Mudança and the outdoor celebratory Mass. On Sunday May 1, the traditional main procession, starting at 04:00pm, local time, will be broadcast live online. From Monday, May 2 through Thursday May 5, the celebrations will close with three days of secular festivities.

Nearly 400 years old, the Festas do Senhor Santo Cristo dos Milagres [Holy Feast of Christ of the Miracles], is the largest religious festivity of the Azores celebrated each year on the fifth Sunday after Easter.

The religious devotion to Senhor Santo Cristo dos Milagres has been held on the island since the sixteenth century following severe seismic events on the region. Today the tradition attracts many thousands of Azorean pilgrims living abroad returning home for the festivities.