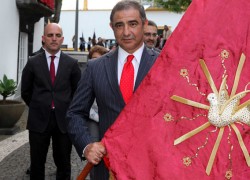 The city of Ponta Delgada is celebrating this weekend the culmination of the Grandes Festas do Divino Espirito Santo [Great Feast of the Divine Holy Spirit] a festival inspired on the Azorean traditional devotion to the Holy Trinity.

The devotion stems from the belief that the Holy Spirit dispenses graces upon graces and that those who honor the Holy Spirit are assured of receiving special blessings.

In its 14th edition the festival gathers the participation of the 24 parishes which form the Ponta Delgada municipality lead by Mayor José Manuel Bolieiro.

One of the most anticipated moments is the sharing of sopas [soup] held in Campo de São Francisco, an open space in the heart of the city. This year the traditional soup was prepared to serve 14 thousand people, all free and open to the public.

Dessert courses include sweet rice cooked from 275 kg of rice, 272 kg of sugar, 275 lemons, 285 dozens of eggs, 90 packages of butter and 8 kg of cinnamon,  in addition to about 2 thousand bolos [cakes] baked to be shared with the public. The occasion also provides 50 food gift baskets for needy families and institutions dedicated to the poor. 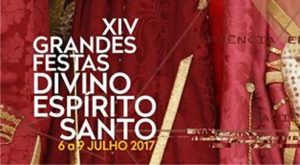 A grand parade takes places on Saturday with representations from all of Ponta Delgada’s 24 parishes, including 57 floats.  At the Town Hall the ‘Room of the Holy Spirit’ was open with 95 Holy Ghost flags and 78 Holy Ghost crowns on display.

On Sunday the Solemn Holy Ghost Coronation is held at Largo da Matriz, followed by the Bodo de Leite parade, a rejoicing of the sharing of the boundlessness of nature. Other festive actives include cultural events such as conferences, concerts, and competitions.

The Holy Ghost Festival is an annual religious celebration that takes place on the Azores and the Azorean diaspora. It last a cycle of seven weeks following Easter. The festivities, which play an integral part in the lives of Azoreans, are celebrated coast to coast in the United States, organized by dozens of active Holy Ghost brotherhoods. More @ Wikipedia