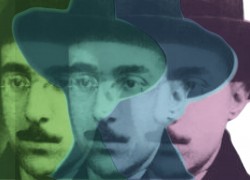 Portuguese writer Fernando Pessoa (1888-1935) is the focus of a number of recent projects and events, including a digital poetry archive and a major art exhibition, marking the growing profile of the writer abroad.

Digital Edition of Fernando Pessoa Projects and Publications (Edição Digital de Fernando Pessoa) is collaboration between Universidade Nova de Lisboa and the University of Cologne, in Germany, that has digitized published poetry by Pessoa.

One of the main goals of the Digital Edition is to provide an accessible platform for scholars and general readers to explore Pessoa’s work, given its relationship to the development of Modernist literature, according to Pedro Sepúlveda, Digital Edition’s editor.

The site includes images and transcriptions of original documents that provide an “understanding between the potential nature of the work and what was actually published” as described by the website. It is accessible in Portuguese, English, and German.

Arquivo LdoD, hosted by the Universidade de Coimbra, is a collection of transcribed original documents and various translations primarily related to Pessoa’s The Book of Disquiet. Launched in December 2017, it is accessible in Portuguese, English, and Spanish.

The exhibit examines the links between Pessoa’s writings, avant-gardism and the rise of Modernism in early-20th century Portugal. The show includes artworks by Amadeo de Souza-Cardoso, Sarah Afonso, José de Almeida Negreiros, and Eduardo Viana, among others. Spanish visitors will be familiar with Pessoa’s work, some of which was first translated into Spanish in the 1950s by poet, writer and art critic Ángel Crespo (1926-1995).

The Madrid exhibition is among other shows that have combined visual art and Pessoa’s writings. In Canada, an exhibition of illustrations based on the writer and his work called Pessoa Desdobrado (Pessoa Unveiled) ran during the latter half of 2017 in Toronto, Ontario. The show was hosted at the Scott Library, York University as well as at the University of Toronto’s Robarts Library.

Fernando António Nogueira Pessoa was a Portuguese poet, writer, literary critic, translator, publisher and philosopher. Born in Lisbon in 1888, he spent several childhood years in South Africa, returning to Lisbon in 1905. Pessoa wrote in Portuguese, English and French. A prolific writer, he not only wrote under his own name but used numerous heteronyms in his work. One of the most significant literary figures of the 20th century, he died in Lisbon in 1935.

———————
Cristina Ogden is a freelance writer and blogger based in Western Canada. She writes on issues concerning the arts and culture of both Portugal and Canada. Her articles, essays and reviews have appeared in journals, anthologies and news sites in Europe and North America.