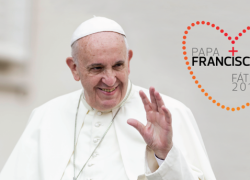 The soccer field Fátima Municipal Stadium will be renamed Estádio Papa Francisco to honor visiting Pope Francis, who is due to visit Fátima Shrine next week.

A plaque renaming the soccer field will be unveiled on May 12, the day the Pontiff arrives in Fátima for a two-day pilgrimage to preside at the 100 anniversary of the Marian Apparitions.

Pope Francis will canonize two of the three Portuguese shepherd children—Jacinta Marto and her brother Francisco—to whom, on May 13, 1917, the Blessed Virgin Mary is believed to have appeared.

The two visionaries, siblings Francisco and Jacinta Marto, died soon after the apparitions. They will become the youngest children (apart from martyrs) ever to be recognized by the church. The third visionary, Lúcia dos Santos, who became a Carmelite Sister, died in 2005.

The apparitions became well-known for the prophecies and miracles associated with them and for attracting thousands of pilgrims who visit the Fátima Shrine from all over the world.

According to the official schedule, on Friday afternoon (May 12), Pope Francis will depart from Fiumicino airport (Italy) to Portugal where he will participate in a welcome ceremony with Portugal’s President of the Republic, Marcelo Rebelo de Sousa, before visiting the Fátima Municipal Stadium and saying the rosary. On Saturday (May 13) the Pontiff will visit the Fátima Basílica of Our Lady of the Rosary and meet the bishops of Portugal before returning to Rome.

Fátima has been permanently associated with the Marian Apparitions that occurred in Cova da Iria, in 1917, where three shepherd children reported seeing the Blessed Virgin Mary between May 13 and October 13, 1917. The apparition re-occurrences were later recognized officially by the Catholic Church.