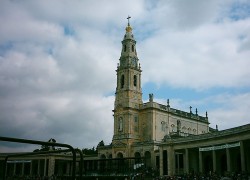 Thousands of people are gathered today, May 1st, at St. Peter’s Square in Rome honoring Pope John Paul II on his beatification. In Portugal, an outdoor mass was scheduled for May 1st and the Shrine of Fatima had planned a concert in memory of the former Pope.

On May 13, the Portuguese Episcopal Conference is celebrating the beatification of John Paul II in a ceremony taking place at the Our Lady of Fatima Shrine, in Fatima.

Pope John Paul II visited Our Lady of Fatima Shrine three times during his papacy: in 1982 (to thank her for saving him from near assassination on her feast day the year before), in 1991 and 2000.

Fatima is one of the most visited Catholic holy places in the world, attracting an estimated one million pilgrims on May 13 and October 13, the most significant dates related to the Fatima apparitions accounts.

Pope John Paul II visited the Azores in 1991. The Ponta Delgada airport, on São Miguel island, was named – Aeroporto  João  Paulo II —  in honor of his visit.  He was the first Pope ever to visit the Azores.

John Paul II made a total of 104 pastoral visits outside Italy. By the time of his death on April 2, 2005, he had made more foreign trips than any other pontiff.

Pope John Paul II was known for his deeply committed to the cause of freedom and human rights. The recent publication of the book “Why He is a Saint”, a biography of John Paul II written by the postulator for his canonization Monsignor Slawomir Oder, examines his character as well as his miracles.