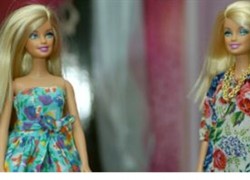 Three Lanidor’s designers were invited to create three new trendy outfits for the fashion sensation doll: one “casual,” one party-going style and one working style.

Barbie dolls, manufactured by American toy-company Mattel, Inc., were launched in 1959. One of the most common criticisms of Barbie is that she promotes an unrealistic idea of body image for a young woman.