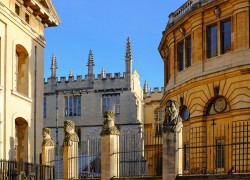 Renewed efforts are being made to recover the unique collection of books plundered from Faro by a British military force more than 400 years ago and kept ever since at the University of Oxford.

The Faro 1540 Association is at the heart of a request for the return of what it regards as an historical, cultural and symbolic treasure.

The association is devoted to the defence and promotion of Faro’s environmental and cultural heritage
The collection it wants returned is believed to consist of 91 volumes. It was stolen from the library of the Bishop of Faro in 1596 when a military force, led by Robert Devereaux, the 2nd Earl of Essex, came ashore from a passing fleet and set the city ablaze.

The atrocity took place during the Anglo-Spanish War while Portugal was annexed and under Spanish rule.
The books were taken from the library of Fernando Martins Mascarenhas, a highly-acclaimed Portuguese scholar and theologian, who resigned as Bishop of Faro to take up the post of Inquisitor General of Portugal.

Back in England, Devereaux presented the books to his friend Sir Thomas Bodley, founder
of Oxford University’s Bodleian Library.

The Faro books have remained in the Bodleian since its inauguration in 1602.

At its general assembly in December 2013, the Faro 1540 Association unanimously approved a motion requesting the return of the books.

The University of Oxford has shown no intention of giving up the collection, but it is now clear that the books are in good condition, securely stored and are catalogued online.

This has been confirmed to us by Sarah Wheale, head of the Bodleian’s Rare Books Department of Special Collections.

“Readers can order any of the books themselves via our online ordering system and take photographs for their own research purposes”, she says. “If anyone wants to come and see any of our books there’s a simple same day process to obtain a readers card,” says the head librarian.

The president of the Faro 1540 Association, Paulo Oliveira Botelho, an archaeologist and historian, says that in order to promote dialogue about the return of the books, the association has been in contact not only with the University of Oxford, but also with the British Embassy in Lisbon, the Portuguese Secretary of State for Culture, the Regional Delegation of Culture, deputies representing the Algarve in the Portuguese parliament, the bishop of the Algarve and the president of the Faro Municipality.

The committee of Faro 1540 has decided that this year, in which the association celebrates its 10th anniversary, it will “re-raise the flag to undertake all possible efforts to recover this important cultural heritage and make this dream a reality”.

Botelho added: “We intend to appeal to the highest authorities of the British government, with the support of the important British community who reside in the Algarve and elsewhere in Portugal, in the name of the Treaty of Windsor, one of the oldest alliances in the world signed in May 1386, which has united us for 633 years.

“It’s time to heal the open wound in our relations and to take a further step in the strengthening of Luso-British relations.”

The renewed interest in the Faro book collection follows the recent request by the indigenous people of Chile’s Easter Island for the return of a unique Moai statue removed 150 years ago and now kept in the British Museum in London.

The sculpture was removed from the island by Richard Powell, captain of HMS Topaze, in 1868 and given to Queen Victoria, who donated it to the museum in 1869.

Closer to home and as Britain prepares to leave the European Union, Greece has reinvigorated its demand for the return of the 2,500-year-old Parthenon Marbles. Britain has long resisted campaigns for the return of what it calls the Elgin Marbles, along with treasures in the British Museum taken from other countries, including Egypt, Ethiopia and Nigeria ─ often citing legislation that bans its museums from permanently disposing of any of their collections.