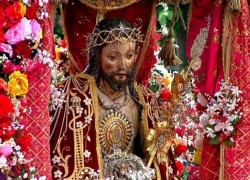 The religious celebrations of the 2018 Festas do Senhor Santo Cristo dos Milagres, [The Holy Feast of Christ of the Miracles] will be held on the weekend of May 5-6, in Ponta Delgada city, on São Miguel, Azores.

The festivities, which open on Saturday April 28, will last through May 1-7, closing with three days of secular events.

According to the 2018 Festivities Program, Cardinal of Lisbon D. Manuel Clemente will officiate the religious celebrations as an invited guest of Bishop of Angra (Terceira) D. João Lavrador.

Highlights of the celebrations will be broadcast live on television through RTP/A, RTP International and RTP Play for the Portuguese communities around the world. In the past years many thousands of Azoreans around the world followed the broadcast festivities.

On Friday May 4, many religious and secular ceremonies are scheduled thorough out the day. Viewers around the world will be able to watch the lightning of the Santuário da Esperança illuminations and the Campo de São Francisco where most of the traditional festivities take place.

On Saturday, May 5, viewers will be able to watch the Procissão da Mudança and the outdoor celebratory Solemn Mass.

On Sunday May 6, the traditional Solemn Procession will take place with stops at all the churches of Ponta Delgada city. 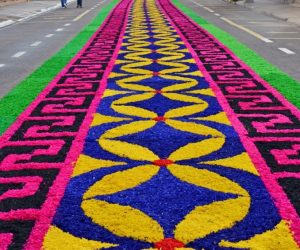 For the occasion, the city streets are lined with carpets of fresh flowers and the windows and balconies are decorated with flowers and draperies.

Established nearly 400 years old, the Festas do Senhor Santo Cristo dos Milagres [The Holy Feast of Christ of the Miracles], is the largest religious festivity of the Azores. The feast is celebrated each year on the fifth Sunday after Easter.

The holy image of the Lord Jesus, venerated by the people of the Azores is an artistic wooden carved representation of the Passion of Christ. The image is worshiped in the Chapel of the Convent of Our Lady of Hope in Ponta Delgada.

The religious devotion to Senhor Santo Cristo dos Milagres has been held on the island since the sixteenth century following severe seismic events on the archipelago. Today, the tradition still attracts many thousands of Azorean pilgrims living abroad returning home for the festivities.

The event, the most emblematic religious celebration of the Azores, will be broadcast live. To watch (in Portuguese) log on to the RTP/A

————————————-
The Azores (population 250,000) is a region of Portugal composed of nine islands. The archipelago discovered by Portuguese explorers in the 15th century, became an Autonomous Region of Portugal in 1976. The government of the Autonomous Region of the Azores includes the Legislative Assembly, composed of 57 elected deputies, elected by universal suffrage for a four-year term; the Regional Government and Presidency, with parliamentary legitimacy, composed of a President, a Vice-President and seven Regional Secretaries responsible for the Regional Government executive operations. The Autonomous Region of the Azores is represented in the Council of Ministers of the Central Government by a representative appointed by the President of Portugal. According to the latest US census over 1.3 million individuals of Portuguese descent live in the United States, the majority with roots in the Azores.