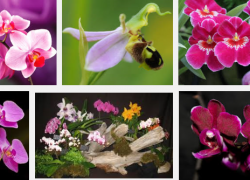 The island of Faial, Azores, will be home of one of the largest European collections of orchids.

The collection of great aesthetic value was donated to the island by the Finnish couple, Tuulikki and Pekka Ranta, following a protocol formalized on Monday between the Government of the Azores and the Ranta family at a ceremony in the Faial Botanical Garden.

About 7,000 orchids of more than 700 different species will be available for public view and for sale. The collection will also become an international tourist attraction.

Currently, the Faial Botanical Garden has its own orchid garden built in 2010, comprising of about 30 species of orchids belonging to Henrique Ávila, a local orchid collector.

In March 2013, the University of Coimbra, in mainland Portugal, also signed an agreement with the Finnish couple to receive a collection donation of 10,000 orchids, one of the largest in Europe, for a period of 30 years.

In 2013, European botanists have identified in the Azores the Hochstetter’s butterfly-orchid, one of Europe’s rarest orchid species, spanning all nine island of the archipelago.