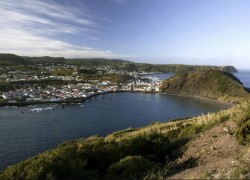 On May 17, the Museum of Horta, Faial, is opening an exhibit celebrating the 95th anniversary of the first aviation crossing of the Atlantic by US Navy seaplane NC-4, which stopped at Horta harbor on May 17, 1919.

The historic mission had began with three identical aircraft, NC-1, NC-3, and NC-4 departing from Naval Air Station Rockaway on May 8, 1919. The NC-4 was the sole aircraft to arrive in the Azores after a 1,200 miles flight lasting 15 hours, 18 minutes. On March 27  the NC-4  arrived in Lisbon, Portugal, before accomplishing  the solo mission in Plymouth, England, May 31.

During the flight bad weather had forced the NC-1 and NC-3 to land in the open sea, with the NC-4 being the only aircraft to successfully complete the mission.

The exhibit, which is part of the International Museum Day celebrations, consists of a display of images of the historic event, including printed documentation, aircraft equipment and the presentation of 1.8 scale model of the historic seaplane created by Fernando Menezes Manuel Teixeira.

On May 20, the Museum of Horta will also open an exhibit celebrating the first Pan Am commercial transatlantic flight, which took place 75 years ago with a stop at Horta harbor on May 20, 1939. The exhibit includes the screening of a documentary about the historic event which established Horta as a  strategic North Atlantic  refueling port during World War II.

In 1939 Pan Am had initiated two transatlantic air service routes with the Boeing 314 “Yankee Clipper”.  The northern route included stops in Newfoundland and Ireland en route to South Hampton, England.  The southern route operated via Bermuda and the Azores en route to Lisbon, Portugal and Marseille, France.

The Azores, strategically located in the center of the North Atlantic, between the continents of North America and Europe, has played a historical role in transatlantic navigation.