The rarest orchid in Europe –  ‘Platanthera Azorica’ – endemic to the Azores, was identified by a visitor this week on Faial island.

Alerted for the possibility of the existence of this rare orchid in the protected area of the Natural Reserve of Caldeira do Faial, a technical team from the Botanical Garden of Faial was called to confirm the finding.

The Regional Directorate of the Environment took note of the new finding and confirmed that fieldwork will follow to identify additional sightings on other islands of the archipelago. 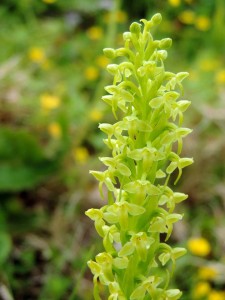 Commonly known as ‘Hochstetter’s Butterfly Orchid’, the ‘Platanthera Azorica’ was rediscovered in 2013 in the central mountain range of São Jorge island, where it was then believed to be restricted to that island in the area circumscribed to Pico da Esperança.

The orchids, likely originate from a single species that arrived by seed millions of years ago. Genetic testing confirms that the lineage of the species derives from Europe or North Africa.

Known locally as ‘conchelo-do-mato’, these rare species are being threatened by habitat destruction and invasive alien plants and need to be protected.