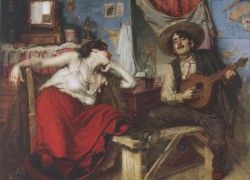 Fado, Lisbon’s mournful song and the Portuguese most traditional music genre, was added Sunday to UNESCO’s list of World’s Intangible Cultural Heritage. According to UNESCO, intangible heritage includes traditions and skills passed on within cultures.

The UNESCO’s committee of experts, meeting on Bali island of Indonesia, unanimously praised Fado as an “example of good practices” that should be followed by other countries.

On its website, UNESCO describes Fado as the”urband popular song of Portugal,” stating

Fado is a performance genre incorporating music and poetry widely practised by various communities in Lisbon. It represents a Portuguese multicultural synthesis of Afro-Brazilian sung dances, local traditional genres of song and dance, musical traditions from rural areas of the country brought by successive waves of internal immigration, and the cosmopolitan urban song patterns of the early nineteenth century. Fado songs are usually performed by a solo singer, male or female, traditionally accompanied by a wire-strung acoustic guitar and the Portuguese guitarra – a pear-shaped lute with twelve wire strings, unique to Portugal, which also has an extensive solo repertoire. The past few decades have witnessed this instrumental accompaniment expanded to two Portuguese guitars, a guitar and a bass guitar. Fado is performed professionally on the concert circuit and in small ‘Fado houses’, and by amateurs in numerous grass-root associations located throughout older neighbourhoods of Lisbon. Informal tuition by older, respected exponents takes place in traditional performance spaces and often over successive generations within the same families. The dissemination of Fado through emigration and the world music circuit has reinforced its image as a symbol of Portuguese identity, leading to a process of cross-cultural exchange involving other musical traditions.

Recently, the Portuguese Parliament had endorsed the initiative in Portugal to promote Fado as UNESCO’s World’s Heritage Cultural Patrimony. The city of Lisbon had submitted its request to UNESCO on July 2010.

In 2009 former Lisbon mayor Pedro Santana Lopes came up with the idea that fado should be considered as a cultural heritage. The initiative was then lead by fado singers Mariza and Carlos do Carmo ambassators representing Fado’s candidacy.

Mariza, a leading contemporary performer, multiple award winner and the ambassador of Fado’s UNESCO candidacy said that should Fado be honored “perhaps we Portuguese may take greater pride in who we are, especially in the so very grey times we currently live in.”

“People shall have a far greater desire to care for, understand and nourish (Fado) as they begin to understand that this is not some lesser culture, but rich and deep and able to be performed anywhere in the world,” the singer explained.

Fado was one of the candidates to get official backing alongside the knowledge about jaguars held by the indigenous Yurupari people (Colombia), the Mariachi musical style (Mexico), the Nijemo Kolo dances of Dalmatia (Croatia), Tsiattista music and dance (Cyprus) and the royal mounted horse parade of Moravia (Czech Republic).

The deciding committee, chaired by the Ambassador of Indonesia to UNESCO, Aman Wirakartakusumah, consisted of 24 countries, including Spain, Kenya, Japan and Venezuela.

While its origin is unknown, historians believe Fado is a multicultural blending of songs by Portuguese homesick sailors, African slave songs and ancient Moorish ballads.

Recently, the Fado Museum was created in Lisbon to preserve Fado’s heritage.