Fado: The Soul of Portugal lecture at the University of Massachusetts – Dartmouth 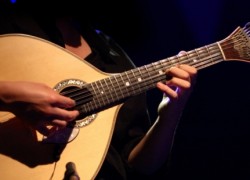 The University of Massachusetts Dartmouth Center for Portuguese Studies and Culture, the Department of Portuguese, and the Department of Music announce a workshop about the Fado presented by Portuguese fado singer Rodrigo Costa Félix, accompanied by Marta Pereira da Costa and Pedro Pinha.

The event, free and open to the UMD community as well as the public, will take place on Wednesday, October 30, at 1:00 p.m. in the College of Visual and Performing Arts, Room 104 (Parking Lot 7).

The entertaining and informative workshop will explore the fundamental elements of the fado: instrumentation; classic fado vs. song fado; the role of lyrics; dialogue between guitar and voice as well as stylization and improvisation.

Today’s fado community in Lisbon will be discussed as well as the evolution of the fado in the last twenty years with a view towards the future and a consideration of the impact of the UNESCO designation of the fado as “World Immaterial and Cultural Patrimony.” Participants will walk away with an intimate and personal view on the fado.

Rodrigo Costa Félix is one of fado‘s brightest stars. His second CD, Fados de Amor (Fados of Love), was awarded “Best CD of the Year” by Portugal’s prestigious Amália Rodrigues Foundation. The Atlantic Monthly called his recent single “Amigo Aprendiz” one of the 12 best ballads of 2012. Although only in his 40s, Rodrigo’s career spans more than 20 years of professional performance.

Joining Rodrigo are the Portuguese musicians Marta Pereira da Costa, a virtuoso of the Portuguese guitar (an instrument overwhelming played professionally only by males), and Pedro Pinhal, a veteran of the classical guitar.

The workshop is part of a U.S. tour organized by Portuguese/American Cultural Exchange, a newly-formed, Massachusetts-based non-profit, with support from the Saab-Pedroso Center for Portuguese Studies and Culture at UMass/Lowell; Camões, Instituto da Cooperação e da Língua, I.P. / CEPE-EUA; and SATA Airlines.