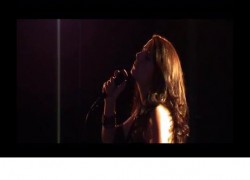 Live fado CDs tend to be big, bustling affairs, rather than intimate and personal ones. The latest work from Sandra Correia, entitled simply Ao vivo [Live], fits squarely in the second category—despite having been recorded in larger venues. The fadista, who sings in the city of Porto and who was recently featured in The New York Times, has an easy, subdued style. The lyrics of her fados are sung from the inside out, without immense theatricality, but with plenty of expressivity and feeling.

Five of the fourteen tracks are based on classic fados: the music is a given, and the lyrics written for it. Included among these is Que pergunta faz o Fado? [What does the fado ask?] — a standout of the disc. The remaining tracks are drawn from the fado canção tradition, where the music is written for and with the lyrics. Among the stronger tracks are Fado Lisboeta [Lisboan Fado] and the opener, Chuva, which is here given an introspective but ultimately uplifting performance.

Indeed, her treatment of the fado canção is particularly notable: she stays true to the original compositions and lyrics but infuses all of them with her particular style. Overall, the selection is varied, both thematically and musically, and makes an excellent overview of the contemporary repertory of the fado. This is a warm, gracious album that deserves repeated listening.

The CD was with Mário Henriques on the Portuguese guitar, Manuel Reis on the viola de fado, and Filipe Teixeira on the contrabass. At present, it is available online only through Portal do Fado’s online store. Those visiting Porto might wish to spend an evening at Casa da Mariquinhas, where Sandra frequently sings.

(*) David Mendonça, a Portuguese American with roots in the Azores, is a contributor to the Portuguese American Journal. A Fado music aficionado, his articles also appear on his blogs Fado Today (English) and Fado Hoje (Portuguese). He lives in New York State.