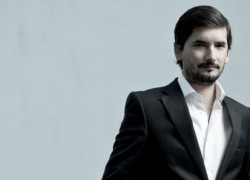 The fadista Rodrigo Costa Félix will be performing on 16 March, in Toronto, Canada, at the Casa do Alentejo, where he will be joined by the musicians Marta Pereira da Costa (the two are married), Pedro Pinhal, and Rodrigo Serrão.

Both Rodrigo and Marta are fiercely hard working. In the last year, they have been thundering through various European venues, and continuing to communicate their work via traditional and new media.

While these activities may not be particularly novel, they are noteworthy for coming from two performers whose work is deeply grounded in the traditional fado. I corresponded recently with Rodrigo (in English) about his life in the fado, and he offered some sparkling insights into his formative years, current activities, and thoughts on the fado in general, including its growing profile.

He was raised in a family that was deeply connected to the fado: his father co-owned a fado house in Cascais with the great fado guitarist José Pracana, and his family’s circle of friends included the fadistas João Ferreira-Rosa, Ricardo Novaes, António Noronha, Carlos Zel, Manuel de Almeida, and others.

As a young boy after the 1974 Portuguese revolution, Rodrigo moved with his family to Brazil, staying there for five years (even now, he feels very much at home in the country). About these early days he says:

“My mother’s taste for Fado was a great influence. And because both my parents knew many fadistas and musicians, I began socializing with them relatively early. But I only really began understanding fado at 16 or so. I think you have to have some kind of maturity to fully understand a music that speaks about deep emotions and serious matters. My greatest influences at the time were Carlos Guedes de Amorim, António Melo Correia, Carlos Zel, João Braga, Manuel de Almeida and, of course, Amália Rodrigues. But I was also influenced by amateur singers that I began to know. Back then you didn’t have the amount of young people in fado houses that there are today. So my friends–apart from our little group of 8 or 10–were all 50 or 60 years old. And that was a good thing. I learned a lot.” 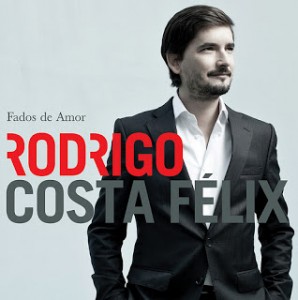 “The first time I ever sang in public was at Nuno da Camara Pereira’s Nove e Tal near Santa Isabel church, in Lisbon. I was with a group of friends who knew I had been singing Fado lately at private parties, among friends and family, and they challenged me to get up there and sing. I sang the two or three songs I knew at the time: ‘Canoas do Tejo, ‘Fado Rosita’ and ‘Fado do Estudante.’ My first contract as a fado singer was with the fado house São Caetano, in the Lapa neighborhood of Lisbon, one or two years later. I was 18.”

In the 20 or so intervening years, he has been singing steadily, most recently at Mário Pacheco‘s Clube de Fado in the Alfama neighborhood of Lisbon, but also, earlier in his career, at the legendary Taverna do Embuçado (then owned by Teresa Siqueira). A key person during this early period was the fadista João Braga:

“With João Braga I had my first stage experience (at Teatro Garcia de Resende, in Évora) and some of my most amazing travels (Newark, NJ twice; as well as France, Luxembourgh, and Spain). He was one of the people most responsible for the visibility of my generation of fadistas. The CD ‘Alma Nova’ (Strauss, 1994)–the first of the 90’s generation–was his idea, and many fadistas, such as Katia Guerreiro, Mariza, Mafalda Arnauth, Gonçalo Salgueiro, António Zambujo, Maria Ana Bobone and many more had their first stage appearences with him. This is something that one day will be acknowledged more than it has been.” 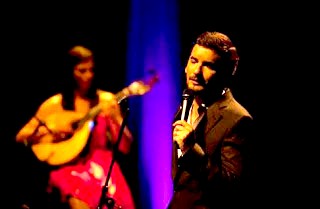 At 40 years old, Rodrigo is therefore already something of a veteran. With time he has witnessed a number of changes in the fado, including those brought about by new communication technologies and new media. As shown by his heavy presence on the web, he has helped usher new technologies into the fado, yet his approach to his repertory is very much traditional. Discussing the changes of the past twenty years, he says:

“There’s a huge difference between then and now, of course,” he says. “Back then things were taken more lightly and in a more amateur way, with a few exceptions. Now it’s easier to show the world what you do, and the communication between artists and fans is easier and faster. But I think we also lost a bit of the ingenuity we had then, maybe even some authenticity. Fadistas are now more professional, more cerebral, more cautious of what they say or do, and this affects the way they interact with each other and others. There’s a good and a bad side for all things, I guess.”

Rodrigo is now roughly the same age as some of the people who were in his family’s circle of fado. In reference to the young (i.e., teenage) singers of today, he says: 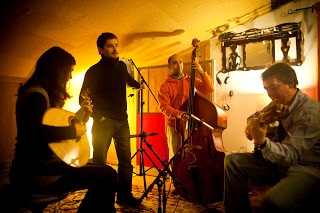 In recital… Photo by Jorge Simão.

“I see that many singers evolve very quickly, sometimes too quickly. One thing we might have lost with this boost in Fado was that genuine sharing of experiences and knowledge with the elders. As a younger singer, I dealt daily with artists a lot older than me and learned a lot from them. Now, youngsters jump very quickly from singing in their shower to the big stages. And you lose something in the middle that is needed.”

“I tend to appreciate many of the new singers and players, and I also learn from them. The likes of Carminho, Ana Moura, Marco Rodrigues, and also less known people like Lina Rodrigues, Carlos Leitão, Vanessa Alves and Gisela João really impress me. I have no idea what they’ll be singing in the coming years, but what I always try to do and say is: keep genuine and true to yourself. Sometimes I think some people use fado as a mean to go somewhere else…but I guess that happens with other kinds of music with these characteristics, like Flamenco or Tango, or even Blues or Country…but Fado goes on and keeps getting stronger and livelier than ever.”

As he suggests, another important change has been UNESCO’s recent designation of the fado as Immaterial Patrimony of the World. This has generated plenty of discussion about whether the designation is making the fado “more fado,” or watering it down:

“I would say both. I hope it will help to define and explain to foreigners what the Fado really is, and to help them distinguish real Fado from what is not. But of course it has attracted loads of people from other genres, people that maybe before this visibility either diminished the fado or spoke poorly about it, but who are now profiting from its increased media exposure. Some artists have brought good things, others have not. The problem is that this confuses people. But I guess, like always, time will manage to separate what to keep and what to dispose of–and I believe that quality will be the decisive factor.” 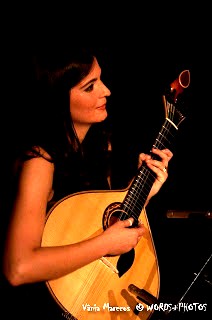 Of course, the designation has led to an increased profile for the fado worldwide. He says:

“I think Fado is flourishing well internationally. There are artists from the Netherlands, Croatia, Japan, Brazil and several other countries singing Fado, people that don’t speak the language. Disregarding the lack of quality of some, the point is that Fado is becoming a worldwide recognized music style. But I continue to think that Fado needs to flourish and establish itself in the country of Portugal: there are still loads of anti-bodies against Fado, although some people now feel forced to speak well of it, because it’s in fashion.”

In various interviews, Rodrigo has spoken about the importance of fado’s lyrical content (and of poetry in general) to his work and career, both as a singer and lyricist. He says:

“I have a great passion for poetry, and it has been a guide throughout my career. Normally the process of creating a fado performance begins with me choosing a poem with which I identify, and I then try to find a Fado that will do it justice. Either that, or I will ask someone to compose original music for the lyric, like I did with Tiago Bettencourt, who composed the music for ‘Amigo Aprendiz,’ and previously with Mário Pacheco on my first solo album.”

“I also like to write a few verses, which I don’t dare to call poems, for poetry is a much more profound and mysterious thing, and my lyrics are plain and simple. But I started writing a long time ago: the first poem I recorded was ‘Ainda te quero,’ and that was back in 1994, for the album Alma Nova, the first Fado CD from my generation (with Maria Ana Bobone and Miguel Capucho). Later, in Fados d’Alma I also wrote a couple of lyrics: ‘Balada ao meu amor‘, with original music by Fontes Rocha, and ‘Mãe’, an adaptation of a song by Zeca Afonso.” 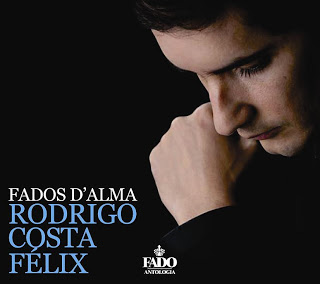 His latest release, Fados de Amor, has generated plenty of interest inside and outside Portugal. Indeed, the song “Amigo Aprendiz” was voted one of the 12 best ballads of the year by The Atlantic magazine in the US ̶ ̶a rare feat for a fado recording. The record also represents his further exploration as a lyricist:

“With Fados de Amor, I went a bit further and wrote two lyrics (‘Canto Breve’ and ‘Partida’) and composed one song (‘Partida’). There’s also a song written by the four of us (Marta Pereira da Costa, Pedro Pinhal and Rodrigo Serrão) for a poem by Rodrigo Serrão, called ‘As palavras que eu procuro.'”

The invitation to perform in Canada was a consequence of a previous visit by Marta Pereira da Costa:
“My wife Marta went to play at Hugh’s Room in Toronto, in a festival called Proud to be Portuguese-Canadian. The director of Casa do Alentejo, Mr. Armando Viegas met her and invited her to return with me for this concert, which will celebrate the 30th birthday of this iconic and exemplar institution of the Portuguese diaspora.”

_____________
Rodrigo Costa Félix will be playing at the Casa do Alentejo de Toronto (1130 Dupont Street, Toronto, Ontario M6H 2A2) on 16 March 2013 at 7:30pm as part of the “GRANDIOSA GALA DO FADO.” He will be accompanied by the musicians Marta Pereira da Costa, Pedro Pinhal and Rodrigo Serrão. Also performing that evening are local fadistas Tonny Gouveia and Jennifer Bettencourt, accompanied by Hernâni Raposo, Eduardo Câmara and Pedro Joel. Reservations at ++1 (416) 537-7766.