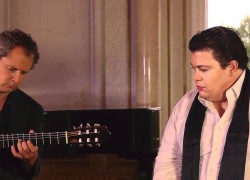 For the first time in New York City, he will be accompanied by renowned guitarist Pedro Joia.

Ricardo Alexandre Paulo Ribeiro, 32, is an internationally respected master of the Portuguese art of fado.  He will deliver an old style traditional fado concert as it is performed in typical old Lisbon. The concert, promoted by Live @ 365 A World Music Series, will be a rare opportunity to experience an intimate show by a unique performer.

Ribeiro’s fourth album, Largo da Memória, was released in October 2013 to critical acclaim from the Portuguese press, as “one of the best contemporary performers of fado.”

Pedro Joia is an accomplished Portuguese classical guitarist and fado devotee renowned for his theatrical and concert work including an ongoing collaboration with international superstar Mariza.

Together, Ribeiro and Joia will transform the vibrant acoustics of the Elebash Hall stage into an intimate Portuguese cafe where two masters of the form will celebrate centuries of tradition by showing how vital fado can be today. Elebash Hall is an intimate, 180-seat space with classical recital hall design and superb state-of-the-art sound.