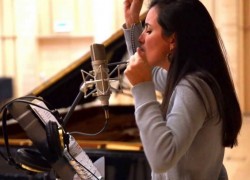 Born and raised in Perth Amboy, New Jersey, to Portuguese immigrant parents, Nathalie Pires is considered one of the leading fado performers of her generation. In 2011 she received the Amália Rodrigues Foundation award and in 2013 the Portuguese-American Leadership Council of the United States (PALCUS) Young “Promessa” award.

Her first album, “Corre-me O Fado Nas Veias” (Fado Runs In My Veins), was awarded AUA (United Artists of America), “Lusíada Award” for “Best Fado Album of 2007” recorded in the USA. She was recently described as the “Fresh face of Fado” by the Boston Globe.

Nathalie Pires is currently traveling between Lisbon and New Jersey, for the recording of her second album, projected to be released worldwide in 2014, including a North American and European tour.