♦  Jorge Fernando brought a very unique fado show to Carnegie Hall last night (24-Jan-12), one that exploited the tension between the old and the new fado in ways that I’d never have expected.

The typical fado show has a very predictable structure: guitarrada (just the musicians playing), followed by a number of individual singers, each of whom sings three fados and then leaves the stage. There is usually an intermission (the intervalo) somewhere along the line, after which the cycle restarts. The folcloric music and touristic fado of the early evening are gradually replaced by the “fado fado”, so that as the night goes on, things usually get more serious and heavy. Jorge’s structuring of the show tonight was something else. In sentiment and in intention, it was somewhat like, but both more and less.

The layout of the stage sent a clear signal: six chairs arrayed in a semi-circle—very different from the typical single microphone and a place for the musicians to sit. After the performers entered, instead of a guitarrada, they played something of a ronda, with each singer taking turns singing verses during perhaps half a dozen fados. One fado transformed seamlessly into the next, thus keeping everyone in the audience slightly off balance and attentive.

Filipa Cardoso stepped to the edge of the stage to sing ” Reviver o passado“, followed by Fábia Rebordão for two fados, including a classic about Chico do cachiné—a song for all the Portuguese in the upper balcony. Then Filipa came forward again for “Meu amor marinheiro”. So, one singer sandwiched in by another? In the fado? Very strange. 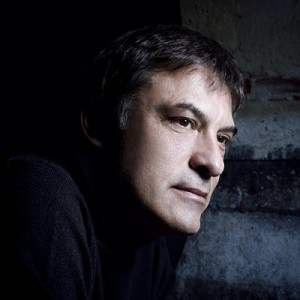 Before the intermission, Jorge Fernando himself sang, this time in duet with Fábia Rebordão—another rarity. But this one worked well because the two harmonized perfectly. (They have been playing together in a trio with one other musicians for some time.) The opening set mainly included songs from straight out of the fado tradition, but expressed within a structure that sat far outside it. My only complaint is that the excellent guitarist, José Manuel Neto, was given very few opportunities to shine (and there were fewer still for the player of the viola baixa, Gustavo Roriz).

After the intervalo, the musicians opened with a guitarrada that included some beautiful playing by Neto. He has a precise rhythmic touch, purposefully falling a bit behind the beat on his way to a spectacularly fast finish.

During the remainder of the set, there were many times when I felt that Jorge had taken us beyond the fado, whether that meant into new frontiers or over the edge of the precipice.

Filipa Cardoso was followed by Fábia Rebordão, who sang one of Jorge’s best known fados, “Chuva”—dosing her delivery with soul and blues inflections. Celeste Rodrigues, the artist of honor for the night, then gave us two pure fados: “Lisboa” and “Meu Corpo” (“My body”), both of which speak of loneliness and separation, from the city in “Lisboa” and from a lover in “Meu Corpo”. Reader, I cried. After these fados, and indeed throughout the night, Jorge showed a special tenderness towards Dona Celeste: looking at her warmly, taking her hand after she sang. This made me think of their long history together, bridged by Celeste’s sister, the great Amália Rodrigues.

After Celeste’s turn, Jorge staked out the opposite frontier of the territory: “Pode ser saudade.” Those who knew this song were compelled to sing it, almost by reflex. It’s one of those songs, like “Triguerinha”—another of his—that always shows up in the fado, and is always sung by everybody in the audience. But is it fado? Hard to say, but it is now part of the fado. And for me, that makes them fado.

Filipa Cardoso represented the another vein of the traditional fado: her delivery, her presence, her appearance, her repertoire, all sat squarely in it. She is the type of singer you would be lucky to find some evening in Lisbon as you wander from tavern to tavern. Hearing her at 2AM you suddenly realize you are in the midst of the real thing. As my old musician friend used to say, she has all the coração, sentimento e alma (heart, sentiment and soul) you could want.

The next moment cut me from my moorings: Fábia sang “Bridge Over Troubled Water.” It is no stretch to say she is technically an excellent singer, and her rendition of this song probably drew the biggest applause of the evening. While it was definitely not fado, it was a thoughtful nod to her audience, to her sister (to whom she dedicated the song), and perhaps to the realities of the music world these days.

The next stretch of songs was almost all folklore—more evidence of Jorge turning convention on its head. By this point, there was a lot of good will in the audience. Celeste sang “Verde Limão”, followed by Jorge with “Quem vai ao fado”, and Celeste with “Havemos de ir à Viana”. All of these are songs about happy times and another vital element of the tradition.

They left the stage and it really looked like the show was done: people started leaving, the lights came on, and yet more people left. But the ones who had stayed started clapping, and this was enough to bring the performers back. As they moved towards their seats, Jorge clearly said “No”, and directed them to the front of the stage. The musicians propped up their legs on chairs, and the singers stood alongside them. Now we are going to the fado. Celeste wondered aloud if we would be able to hear her. Thanks to the acoustics of the space, we could. What happened next was a thing of beauty, of intimacy, of everything that enables the fado to bring people together, even if the room is Carnegie Hall.