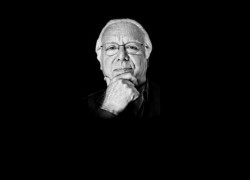 Portuguese fado performer Carlos do Carmo will be honored with The Latin Recording Academy’s Lifetime Achievement Award at a ceremony to be held on Wednesday, November 19, at the Hollywood Theatre at the MGM Grand Hotel and Casino as part of the weeklong 15th Annual Latin Grammy Awards celebration.

The Lifetime Achievement Award is presented by vote of The Latin Recording Academy’s Board of Trustees to performers “who have made creative contributions of outstanding artistic significance to the field of recording during their careers.”

“It is with great pride that we pay homage to this diverse and exceptional group of honorees along with commemorating the indelible musical heritage they have bestowed upon us and the roads they have paved for the advantage of new generations. They are each truly masters of their genres and we look forward to welcoming them to the roster of iconic artists we have honored before them,” said Gabriel Abaroa Jr., President/CEO of The Latin Recording Academy in a prepared statement.

Considered one of the greatest fado singers of his time, “Carlos do Carmo’s distinctive style of singing is marked by the special timber of his voice along with his personal affinity for French pop balladry and Brazilian bossa nova, creating an unmistakable and definitive sound that distinguishes him as one of the most iconic voices of Portuguese music,” the Latin Recording Academy’s Board of Trustees has stated.

Among his vast repertoire of songs, Carlos do Carmo is most recognized for Lágrimas de Orvalho, Lisboa Menina e Moça and Canoas do Tejo. He has received international acclaim and has performed to sold-out crowds in landmark venues such as the Royal Albert Hall in London, the L’Olympia in Paris and Carnegie Hall in New York.

Awards and honors include the title of Honorary Citizen of the city of Rio de Janeiro, Member of Honor of the Ibero-American Cloister of Arts, through the diploma awarded by the Senate of Rhode Island in the United States for her contribution to abound the dissemination of Portuguese music, Golden Globe SIC Merit and Excellence, Award of consecration career of the Portuguese Society of Authors, and Portugal’s National Order of Infante Dom Henrique.

Carlos do Carmo, 75, was born in Lisbon, Portugal, the son of legendary singer Lucilia do Carmo who had great influence on his career. He played a key role in making fado part of UNESCO’s World Heritage Cultural Patrimony via his countless concerts, recordings and participation in director Carlos Saura’s 2007 film Fado. His career has lasted more than 50 years,

The Latin Grammy Awards recognizes outstanding artists for their career achievements honoring their exemplary contributions to the world of Latin music.