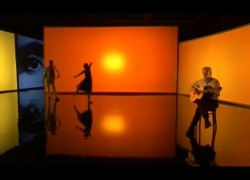 The Boston Portuguese Festival (BPF), in partnership with the Consulate General of Portugal in Boston and the School of the Arts at Emerson College, is hosting, May 16, two cultural events which include “Fado Vadio”, a photograph exhibit by Luís Pavão, followed by the exhibit of the film feature “Fados” (2007) by Carlos Saura.

The events, open to the public and free of charge, will take place at the Emerson College, Huret & Spector Tufte Performance and Production Center, 10 Boylston Place, 6th floor, Boston MA.

The exhibit opening and reception is scheduled for 6pm, followed by the film exhibit scheduled for 7pm.  The film screening of Fados (TRT: 90 minutes) is a collection of fado performances directed by Carlos Saura.

The “Fado Vadio” photograph exhibit, presenting  40 pieces by Luís Pavão, will run through May 25, from 3pm to 7pm, except on weekend days. The exhibition is a collection of more than 20 years of shooting pictures of  fado singers in the taverns of Lisbon, Portugal’s capital.

Established in 2006, the 7th Boston Portuguese Festival  promotes cultural annual programs bringing to the Greater Boston area a showcase of the most expressive components of Portuguese culture in the fields of Literature, Music, Cinema, History and Current Affairs, Science and Technology, and Heritage.