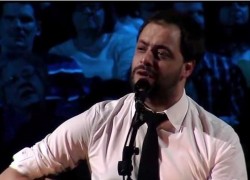 Portuguese fado vocalist António Zambujo is returning to the United States for his 2014 concert tour starting January 25, in Los Angeles, followed by shows in Seattle, Phoenix, Minneapolis, San Francisco and a finale at Carnegie Hall in New York City, February 8.

Zambujo, 38, who also plays de guitar, is quite a singular artist in Lisbon’s fado environment. Besides his musical education – he studied clarinet from the age of 8 and classic guitar later on – he was deeply influenced by the music of Alentejo his homeland region in southern Portugal.

Zambujo is part of a new generation of younger artists who have contributed to the revival of fado and to the rising prominence of the male voice on stage. His style is characterized by a sense of tradition and a keen desire for rejuvenation, brilliantly demonstrating how music can be both faithful to the past and eminently contemporary.

He first became known in Portugal in 1999 for playing fado legend Amália Rodrigues’s husband in the popular musical Amália. In 2001, he started to work with Ricardo Cruz, bass player and musical producer of all his albums. O Mesmo Fado (2002) allowed for the recognition of his peers, and earned him the prestigious ‘Radio Nova FM’ award for the Best New Fado voice.  For 2004’s Por meu cante he won the ‘Amália Rodrigues Foundation’ award for the Best Fado Male Singer.

Both Outro Sentido (2007) and Guia (2010) on World Village were Top of The World albums in Songlines Magazine, and the latter was a World Music Charts Europe topper. Zambujo’s 2009 Rio de Janeiro concert was rated among Youssou N’Dour, Elton John and Radiohead as one of the year’s 10 best foreign concerts in the main Brazilian Newspaper, Globo.

With a rustling clarinet and cavaquinho here and there, Zambujo’s velvety voice sparkles across the sensual music on Quinto dominated by the guitar and led by the contrabass of Ricardo Cruz, The album reflects cozy light and cool jazz mixed with soft Bossa. More than ever considered the guarantor of a tradition and an innovative pioneer, Zambujo is as much an heir to Amália Rodrigues as he is to Chet Baker and João Gilberto.

An international fado star, Zambujo is known for incorporating elements of Brazilian bossa nova, jazz and his native cante alentejano into the genre. His latest album Quinto was highlighted on NPR’s All Things Considered and was a Global Hit Pick on PRI.

For more information >> dates and venues >>