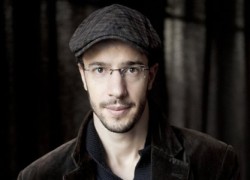 Ambassador of Portugal, Domingos Fezas Vital, hosted the Embassy Series concert of Júlio Resende, a brilliant Fado and Jazz musician from Portugal who made his debut in Washington, D.C. on June 23, 2016. The event, which was also posted on the newly redesigned website of the Portuguese Embassy, was a resounding success.

Resende, who is considered one of the most creative pianists in the new generation of Fado and Jazz musicians in Portugal, delighted the audience with authenticity and sincerity – both of which came touched the hearts through his artful strokes of the piano key and playful use of the musical instruments as well as simple spoken words.

Anne Howard-Tristani, a niece of the late Vice President Hubert Humphrey and Embassy Series Board Member, felt that “the creativity of his ‘Fado’ jazz and musical improvisations were remarkable both in their intensity and in their beauty. I have rarely heard such a gifted pianist.” These sentiments were echoed by almost everyone who attended this remarkable event of musical diplomacy.

The musical concert at the Portuguese Embassy through the Embassy Series, founded by Jerome and Lisette Barry, is usually held in the later part of spring or early summer making it one of the most popular and well attended events of the year. It is sold-out early, most often, due to the attraction to the Portuguese culture, cuisine and the hospitality extended by cultural staff led Joanna Mayer.

This hugely popular event attracted participants from far and wide. Distinguished business leaders George and Marge K. Degnon, whose firm based in McLean, Virginia provides management services to professional associations attended with their son and daughter-in-law. Mr. Degnon’s son, George M. Degnon, who visited Portugal as a student, is now a Brigadier General in the U.S. Air Force and has made several successful tours to Iraq and Afghanistan. 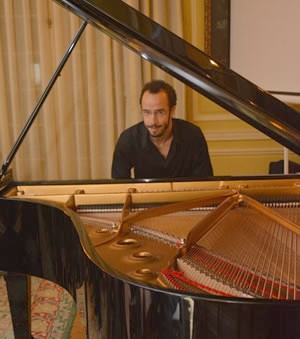 Howard-Tristani “thought it was special for the parents to take their 50+ year old son, who is a General, to the concert because he had visited Portugal as a young student. The impact of early international education experiences supports and underscores the broader mission of the Embassy Series in promoting international understanding and appreciation of diverse and foreign cultures ….and the importance of acceptance and valuing diversity – even through music, such as Fado – which I am sure was a new experience for many concert goers last evening.”

Edgar Costa, a successful businessman from Portugal with investments in the United States and UAE, also attended the event with his wife along with many artists, diplomats, physicians and admirers of the Portuguese music and culture.

This memorable event was sponsored by United Technologies Corporation, along with the Arte Institute of Portuguese Contemporary Culture. Four representatives of UTC attend the concert, including Allison Rae Ford, Manager of International Government Relations at UTC. As a corporate citizen, UTC takes pride in “moving The World Forward. We do the big things that others cannot” and continues to provide valuable support for important cultural events presented by the Embassy Series in its effort for “uniting people through musical diplomacy.” 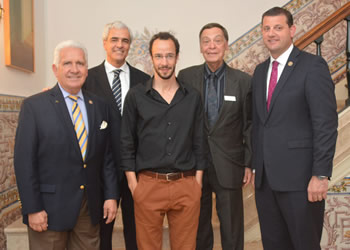 Congressman Valadao’s family emigrated from the Azores Islands of Portugal to the United States in 1969. After settling in the Central Valley, Valadao’s father started a small dairy farm in 1973. He was elected to California’s 21st District and has gained a reputation as one of the Republican Party’s leading advocates of comprehensive immigration reform.

According to his official biography, Congressman Costa was raised on a dairy farm in Fresno’s Kearney Park area, and is a third-generation family farmer. “As a Member of Congress, Costa has applied his farming background to fighting for Valley water, agriculture, and the economy.” He is known to be an advocate of creating a high-speed rail system that would go up and down California as well as across the nation at speeds of 225 miles-per-hour. Congressman Costa has introduced many bills supporting these rails.

For the admirers of Portuguese cuisine and music, the musical event at the Portuguese Ambassador’s residence this year was a cultural crescendo. Alison Adler, Embassy Series Board member noted that the “magnificent Portuguese buffet reached new heights.”

All together this year was made more special with the arrival of Ambassador and Mrs. Vital, who along with Mrs. Vital’s mother engaged with the guests sharing their experiences of travel within the United States. They all seemed to fall in love with Washington as a city for its natural beauty and the cultural diversity.

When speaking about the friendly relations with the United States, Ambassador Vital said: “Portugal is the closest neighbor across the ocean.” These important words brought into focus the expansive bridge displayed on the Embassy’s website and the purpose of the evening i.e. to strengthen the cultural bridge between two friendly nations.