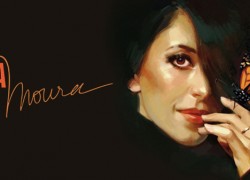 Ana Moura, who has toured the United States before, made her Carnegie Hall debut in 2005. The recipient of many awards, she has collaborated with such artists as The Rolling Stones, Caetano Veloso, Gilberto Gil, Herbie Hancock, and Prince.

She will share the stage with Spanish world music singer Buika, in a concert celebrating Latin song traditions. Born María Concepción Balboa in Palma de Mallorca, Spain, Buika grew up within the Spanish culture. She has a variety of musical influences, including jazz, flamenco, pop, soul, and African polyrhythm.

Born in 1979 to a family of fado singers, Ana Moura sang her first fado at age six. Although fado came naturally to her, she started her singing career at age 14 experimenting with other genres including a rock band. Presently, as a mature fado singer, Ana Moura still likes to experiment with new genres and has taken the fado art form in new directions by including acoustic guitar, double bass, keyboards, and drums to her performances.

In 2007, Ana Moura was invited to record two songs with The Rolling Stones — “No Expectations” and “Brown Sugar” — for The Rolling Stones Project vol. 2, a collection of Rolling Stones songs interpreted by World Music artists. In 2010, she collaborated with American music icon Prince. He performed onstage with Ana Moura in Europe and has also worked with her in the recording studio. She also appeared at the 2010 and 2011 San Francisco Jazz Festival. Her 2009 CD, titled “Leva-me aos Fados (Take Me to the Fados),” went triple-platinum in Portugal and was 7th on Billboard’s Top World Albums Chart. Moura’s sixth album released in Portugal in November 2015 was awarded Gold status.