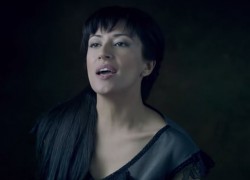 Portuguese fado singer, Ana Moura, will open her 2014 United States tour with a concert at the Berklee Performance Center, Boston, MA, on Friday, November 7, at 8:00pm, backed by Portuguese guitars.

Moura, who has toured the United States before, will be also performing in Connecticut, New Jersey, New York, Arizona, and California. Before touring the United States, Moura will appear (November 5) at the Toronto Royal Conservatory, in Canada.

Born in 1979 to a family of fado singers, Ana Moura sang her first fado at age six. Although fado came naturally to her, she started her singing career at age 14 experimenting with other genres including a rock band. Presently, as a mature fado singer, Ana Moura still likes to experiment with new genres and has taken the fado art form in new directions by including acoustic guitar, double bass, keyboards, and drums to her performances.

Moura has sold out prestigious venues all over the world including the New York Carnegie Hall. In 2007, Ana Moura was invited to record two songs with The Rolling Stones — “No Expectations” and “Brown Sugar” — for The Rolling Stones Project vol. 2, a collection of Rolling Stones songs interpreted by World Music artists. In 2010, she collaborated with American music icon Prince. He performed onstage with Ana Moura in Europe and has also worked with her in the recording studio. She also appeared at the 2010 and 2011 San Francisco Jazz Festival. Her 2009 CD, titled “Leva-me aos Fados (Take Me to the Fados),” went triple-platinum in Portugal and was 7th on Billboard’s Top World Albums Chart.