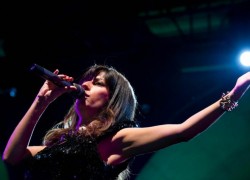 Moura, who has toured the United Sates before, likes to experiment with new genres. In her new tour she will be accompanied by a new trio of musicians which includes Jazz musician Bassist Yuri Daniel, Pedro Soares on classic guitar, and Angelo Freire one of the youngest and best Portuguese guitarists.

She will perform songs from her four CDs, including 2009’s “Leva-me aos Fados (Take Me to the Fados),” which went triple-platinum in Portugal and was 7th on Billboard’s Top World Albums Chart.

“I think the influences of everything we hear and experience end up changing our vision of things a little bit, and that way we also end up putting a more personal mark on songs that have been part of fado history for so many years,” said Ana Moura in a recent interview.

Moura, who has sold out prestigious venues all over the world, was the first Portuguese artist to set foot on New York Carnegie Hall’s stage.