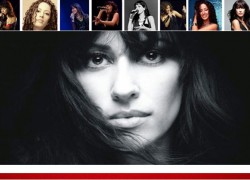 Portuguese fado vocalist, Ana Moura, is launching her 2013 North American concert tour, on February 28, with a number of concerts scheduled coast to coast in the United States and Canada.

The tour is a promotion of her most recent issued CD titled “Desfado” for sale on February 26, 2013.

Moura, who has toured the United States before, will be backed by the Portuguese guitar. However, she also likes to experiment with new genres and has taken the fado art form in new directions by including acoustic guitar, double bass, keyboards, and drums to her performances.

Her recent CD, titled “Leva-me aos Fados (Take Me to the Fados),” issued in 2009’s, went triple-platinum in Portugal and was 7th on Billboard’s Top World Albums Chart.

Moura has sold out prestigious venues all over the world including the New York Carnegie Hall’s stage.