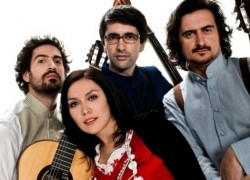 On December 2, BAM features performances from Lisbon’s finest musicians, tracing the roots of Fado through the Portuguese guitar and a multigenerational vocal ensemble, coupled with the US debut of Camané, the leading male fadista of his generation. Camané was honored last week in Lisbon with the “Prémio Amália” for the Best Recording of the Year.

On December 3, BAM offers a glimpse into the future of Fado and Portuguese regional music with the sprightly pop music of “Deolinda”, an acoustic quartet from Lisbon, and “The Gift” interpreting the songs from “Amália Hoje”, the best-selling recording of 2009 in Portugal, which recasts some beloved songs of “Queen of Fado” Amália Rodrigues with fresh arrangements that combine orchestral pop, rock, and electronica. 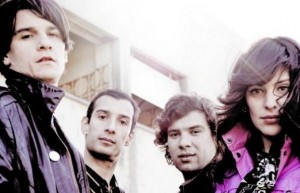 "The Gift", one of the 2 quartets playing December 3. The acoustic quartet "Deolinda" is featured on the picture at the top.

The quartet “Deolinda” features the singer Ana Bacalhau and it is generally credited in Portugal as being in the front of a movement for the rebirth and modern evolution of Fado music. Its most recent hit is “Que Parva que eu Sou” a song of social intervention. For those that understand Portuguese the lyrics are here.

To mark the 10th anniversary of Fado legend Amália Rodrigues’s death, Nuno Gonçalves of the Portuguese band “The Gift” re-interpreted selections of Rodrigues’s vast catalogue with three well-known Portuguese musicians: Sonia Tavares (The Gift), Fernando Ribeiro (Moonspell) and Paulo Praça (Plaza). They took nine fados immortalized by Amália Rodrigues and re-interpreted them with a contemporary approach. The resulting “Amália Hoje” has gone triple platinum in Portugal and catapulted “Hoje” into the international arena.

Besides the show on December 3 in Brooklyn, NY, “The Gift” will present the “Amália Hoje” show on Sunday, December 4, in Boston, MA, at the Berklee Performance Center, located at 136 Mass Avenue. Tickets for the Boston show can be purchased at www.WorldMusic.org