Fado: A night of nostalgia at Alfama Restaurant – NYC 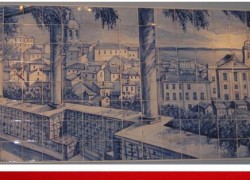 There’s a warm and winning group of singers and musicians evoking the fado in Manhattan, at the Alfama restaurant on E 52nd St. While Newark, NJ is the place to hear big, bustling fado–in larger venues, with lots of singers–Alfama gives you a chance to hear and feel this music up close.

The upstairs restaurant at Alfama is known for high quality food and a classy atmosphere. Downstairs, where the fado happens, the space is more intimate: when I was there on 6 February with five other friends and family, about 25 people were enough to fill it. As in a classic Portuguese fado house, the musicians and singers perform from the corner, without microphones. The effect–so important for the fado–is that you are keenly aware of the fact that you’re all in the same space, part of the same conversation. Amazingly, there was not a peep from anyone as the music played–something that, even in Lisbon, is a rarity. 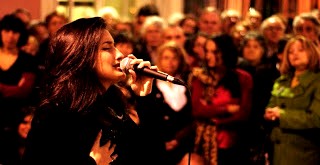 The singers, particularly the luminous Nathalie Pires, provided background on many of the fados they played, describing the lyrics, sometimes the people behind the music, and what the fado means to them and to Portuguese culture. However, this is NOT tourist fado: what you’ll hear at Alfamais actually closer to the “real” fado than some of the fado you might hear in Lisbon (particularly if your tour bus is parked outside).

Nathalie Pires is tireless in her devotion to the fado, singing both in the US and abroad (including gigs at Mário Pacheco’s Clube do Fado in Lisbon). Her impact in the US has been enormous, so it was a pleasure to hear her in this more intimate space. It appears that, as her career evolves, she is branching out–exploring new lyrics and new sensibilities. I particularly appreciated her more upbeat performances, such as “Nunca há silêncio vão” (“Silence is never in vain”). I look forward to hearing how far she is willing to push this new direction: she certainly has the personality and technical skills to pull it off. 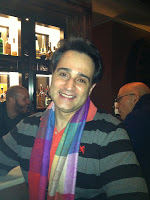 Tarcísio Costa, a co-owner of Alfamaand also one of the singers, brought a romantic sensibility to the fado, notably on the lovely “Vielas d’Alfama”. His singing was as confessional and as unpretentious as one might find in the actual Alfama quarter of Lisbon. He is the kind of singer who obviously has many stories to tell, not the least of which is trying to make a “real” Portuguese restaurant happen in NYC. In a strange twist that shows just how tight the fado’s grip can be, he began singing after his mother–who, Tarcísio says, instilled in him an affection for the fado–died in 2009. But his mother wasn’t of Portuguese descent, but Italian. And Tarcísio isn’t from Portugal, but from Brazil.

A night of fado would not be complete without a few surprises. The first was the unannounced appearance of the young fadista Pedro Botas, a fixture of the Newark fado scene. Pedro has a rich vibrato to his voice. He worked his way confidently through “Acordem as Guitarras” and “Lisboa Menina e Moça”, both valentines to the city of Lisbon. The second surprise was the musicians, both of whom brought a bright, vibrant playing to the evening. The guitarist, Pedro Henriques da Silva, built a rich dialogue with each singer. He led the way confidently through the music (including a notable “Fado Pedro Rodrigues”) and, in the final set, a guitarrada centered on the traditional fado. The viola player, Francisco Chuva, laid an immense foundation for all of the fados performed tonight. His is the kind of playing that leads singers (and guitarists) to take risks, knowing that the beat will be there to provide a soft landing.