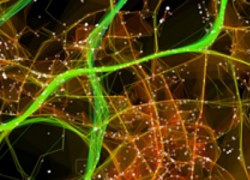 The installation video “Visualizing Lisbon’s Traffic,” portraying the traffic of Lisbon as a metaphor for living organisms, is part of the “Talk To Me: Design and the Communication between People and Objects” exhibit at the Museum of Modern Art (MoMA), NYC, through November 7.

The processing software installation is a creation of a team led by Pedro Miguel Cruz, a researcher at the Centre for Informatics and Systems of the University of Coimbra.

The team mapped the GPS coordinates and velocities of 1,534 taxis circulating throughout Lisbon over one month, using data provided by MIT Portugal’s CityMotion project, and then condensed the data into an animation representing an average single day to produce a dynamic visualization of the city’s traffic. 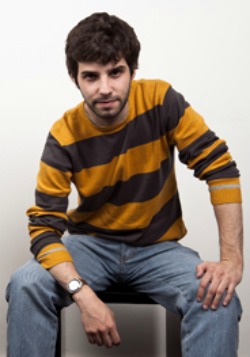 As a novel way of expressing useful everyday information, the project suggests applications for future mobile decision-making technology and presents an elegant image of the city and transport network as a pulsating protozoan organism—with a metabolism that shifts depending on the time of day.

Pedro Miguel Cruz, 26, started his academic career at the Physics Engineering at Instituto Superior Técnico in Lisbon. He later transferred to Informatics Engineering at University of Coimbra where he is a lecturer.

At the University of Coimbra he started researching motion and interactive installations. Currently, he is completing a Master thesis in information visualization and aesthetics.

He received the 2011 “Seeds of Science Junior Award” by SIGGRAPH an international organization dedicated to the generation and dissemination of information on computer graphics and interactive techniques.