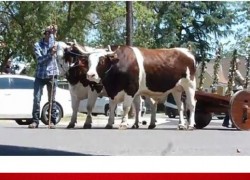 The Tulare County Farm and Agriculture Museum, in Visalia, California, is hosting an event honoring the County’s Azorean-Portuguese heritage. The dispay will open January 19, with a reception from 1 p.m. to 3 p.m.

Dances traditional to the Azores, exhibits, food, photographs and artefacts from local Portuguese families, will be on display.

“Tulare County is proud to honor the Portuguese community and the contributions they have made to the San Joaquin Valley,” said Pete Vander Poel, chairman of the Board of Supervisors, in a release. “I would like to extend an invitation to the public to attend this important event.”

Tulare is sister city to Angra do  Heroismo, on Terceira island, Azores. The  75-foot Heroismo Tower Square Clock  and Bell Tower located in the heart of Downtown Tulare,  honor Tulare’s rich Azorean-Portuguese heritage in the community.