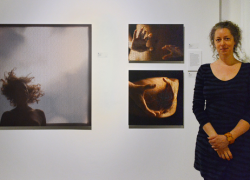 An exhibition of anthotypes by Toronto-based artist Teresa Ascencao is the focus of Daily Bread, running at the Workers Art & Heritage Centre in Hamilton, southern Ontario, until August 17, 2018.

The exhibition features scenes from the Portuguese-Canadian immigrant community whose livelihoods have been characterized by physical labor. The works are influenced by the history of Portuguese immigrant labor in the region as well as Ascencao’s personal experiences, having been raised by a family of manual laborers. 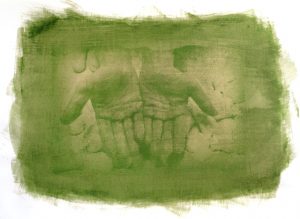 This latest exhibition continues the artist’s exploration of social constructs of the body. Daily Bread is a series that has focused on workers’ hands and the work produced, ranging from images of construction and garment workers to crocheted doilies and calçada cobblestones.

Anthotypes use photosensitive emulsions made with plant materials to make prints of photographs. The emulsions are applied to a prepared surface like paper or canvas and exposed to sunlight over time (ranging from a few hours to several weeks).

Highly dependent on the natural conditions at the time of processing, the results are softly-colored images. Ascencao used juices from vegetables and fruits closely associated with Portuguese and particularly Azorean cuisines.

Exhibition curator Abedar Kamgari views the labor-intensive process that the artist undertook to produce the anthotypes as akin to the physical labor depicted in the artworks.

Immigrant a story are often not discussed in public settings like museums, but as Kamgari explains: “Initiating critical conversations about immigrant experience and work in Canada can be extremely helpful in understanding the world in which we live, and demanding a world that is more caring and just for everyone.”

Teresa Ascencao is the daughter of Azorean immigrants. She was born in São Paulo, Brazil before her family settled in Canada. She is a multimedia artist and instructor at OCAD University in Toronto. She is also the Art Director of Arts Unfold, which produces collaborative events and art residencies, including Luminous Bodies.

Abedar Kamgari is a visual artist, curator and arts worker/administrator based in Hamilton and Toronto, Ontario. Her artwork often employs performance and video in order to explore issues related to the immigrant experience.

——–
Cristina Ogden is a freelance writer and blogger based in Western Canada. She writes on issues concerning the arts and culture of both Portugal and Canada. Her articles, essays and reviews have appeared in journals, anthologies and news sites in Europe and North America.