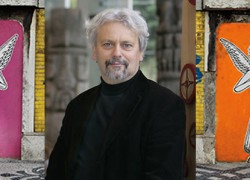 Heaven, Hell and Somewhere in Between: Portuguese Popular Art was an art exhibition curated by Professor Anthony Shelton, of over 300 Portuguese folk art works at the Museum of Anthropology at the University of British Columbia, in Vancouver, Canada from May 12-October 12, 2015.

The exhibition included exquisite marionettes, figurines, carnival masks, and ceramics. Digital graffiti projections and smart installations allowed the art works to play off each other. These projections came from above, swirling beneath the artwork like flames or from the side, spilling across the art, like ocean waves. The art works were sometimes close to the viewer, nestled on little tables, or casting long shadows on walls, or dangling above us. Curatorial panels, in both Portuguese and English, expanded the viewer’s knowledge of all things Portuguese – from myths of the sea to geography, from saints to devils, from politics to village parades. The art works were beautifully wrought, often highly theatrical, and expressed ecstasy, suffering, politics, religion, playfulness, and community in ways that are unique to the Portuguese.

Raincoast Books has recently published a book to go with the exhibition, Heaven, Hell and Somewhere in Between; Portuguese Popular Art by Anthony Alan Shelton, available Sept 2015. The book includes an in depth analysis of Portuguese popular art and culture, with excellent photographs of 40 artworks, and another 60 supporting images that give context to the art work, including graffiti, street performers, medieval frescoes, and artists in their studios.

The curator of this exquisite exhibition is museum director and professor Anthony Shelton, who has an extensive background in Mexican and Latin American art, and expertise in changing practices around collecting and exhibiting art. In this interview, he shares his inspirations and experiences with Portuguese American Journal readers.

Elaine Avila: What inspired you to curate this exhibition?

Anthony Shelton: I came to Canada from the University of Coimbra and was welcomed by Terry Costa and the Portuguese Benevolent Society. I supported Terry’s campaigns to give the Portuguese community more profile in Vancouver and backed his successful bid to have a day in the civic calendar named in honor of the country and provided a venue for some of their events. The day came when Terry asked me whether the Museum of Anthropology (MOA) would curate an exhibition on Portugal. He told me that despite the size of the Portuguese population in Canada no major art gallery or museum had ever done an exhibition on a Portuguese theme. We talked and we decided to do a much less ambitious exhibit profiling 15 folk artists. Terry left Vancouver for the Açores leaving me to make good on my promise. 2010-11 I returned to spend the year in the family house in Portugal with a plan to give a month to collecting material for the exhibition. I began reading about folk art and visiting artists and before I knew it I had been sucked into trying to understand the whole era of the dictatorship and how it had reconfigured poetry, philosophy, literature, art, architecture and history and the position of folk art within this universe. Soon the whole of Portuguese history, or rather the writing and spectacularization of Portuguese history, swallowed me wholly. Five years later the exhibition and book emerged out of these labyrinths.

Many of the artists have never been exhibited before …. Did this affect your process with them? If so, how?

Originally Terry and I had decided it would make the process of preparing the exhibition more interesting if we set ourselves the task of “discovering” at least five new artists. We did, but sadly it wasn’t the discovery of the new that marked me, but the death of the old. Four of the artists in the exhibition died in the five years it took me to prepare the show. That was overwhelmingly sad and gave me the impression I was witnessing the passing of a world with its stories, values, attenuated characters and shabby but immensely attractive raw living.

How did you arrive at the design of the exhibition?

Folk art is an orphan subject. Anthropologists and art historians are uncomfortable with it and anthropology museums and art galleries seldom do engaging exhibits. They are unable to extinguish the musty opinions that it is rustic, naïve, simple, unsophisticated, decorative and lacking deeper meaning. So after visiting exhibitions in London (British Folk Art, Tate Britain 2014), Santa Fe, Dresden, Krakow, I knew it couldn’t be exhibited in a white cube or on a contextualizing or documentary set. It needed something else. No flat color worked with the pieces. We tried the color of the Minho soil and rust, but neither worked. Then Skooker, our designer, weathered a piece of steel. The uneven rust changed the quality of light and its variegated colors caused the collection to dance. After that, even though it took months to figure out, the rest was easy. Raw cotton to soften the metal and provide a waspish, ethereal presence and the projection mappings to inscribe poetry and vigor into the whole gallery…

How would you describe your approach to curating? Was it different for this project? If so, how?

I’ve always been interested how history never passes and disappears. The past piles and insinuates itself into the present – Benjamin’s angel of history, or Octavio Paz’s layered pyramids are the metaphor. I lived in Mexico for six years in the 1970s-80s, surrounded by multiple coexisting caricatures. They still haunt me today. I try to identify these elements, suggest how they might combine, what they create, trace their trails. It’s subjective trying to conjure essences from dumb visibility.

Do you feel the exhibit advocates for artists working in traditional ways?

Yes, very much so. Almost without exception Portuguese folk artists feel neglected and undervalued. Many have other jobs and only practice their art part of the year or part of the day. Some took it up after they retired. They have been the subject of few exhibitions; they find it difficult to make a living. The book in particular became a moral obligation for me, a way of giving something back for the creativity that has cost them a hard life. It’s an acknowledgement of the complexity of their times and the navigations they have charted across them. It was a responsibility to trace as much of a cultural history and visual landscape as I could to put them firmly in the middle. 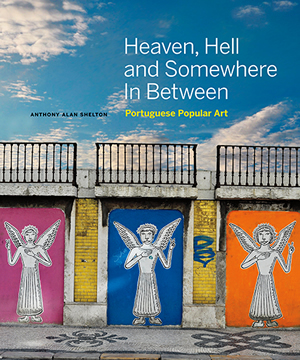 You recently took a group to Portugal in conjunction with the exhibit. How did it go?

I started the tour by telling them the journey was not about history or culture, but if it was to be successful, it would be an enchantment. I wanted to share with them the images I had reserved in my memory; qualities of light on tile and water; smells and tastes and intoxications. In museum stores, marionette theatres, monasteries and palaces we searched for this Portugal. We dined at truck stops and at one of Portugal’s great restaurants perched high on the banks of the Douro with Porto providing the illuminated scenography under a moonlit night. It was a bit of an eccentric idea, but I think it went down well. A strange thing to do mind you.

It’s everything I know about Portugal – all those things that stop me and make me think. The section on exhibitions and museology I wrote from notes that I made while a professor at the University of Coimbra. The rest comes from travelling, talking, reading and thinking about Portugal carried out over the past 35 years or so. The chapters don’t follow on so they had to be divided into distinct sections so there could be some coherencies. Despite that, I discovered how to write through that work. I want to write another now on Mexico – in the same fragmentary way. It actually isn’t everything. I ran out of time so the chapter on gardens and solitude was never written. It never will be because now there’s nowhere for it to fit.

—————
The book was published by Figure 1 of Vancouver, BC, Canada, and is available for purchase in bookstores and on Amazon (link above).
Publicity requests can be sent to Fernanda Viveiros at fernanda@raincoast.com
—————