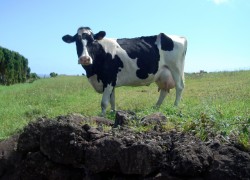 California leads the nation with its Portuguese-American population of over 330, 000 people. The second largest concentration of those who claim Portuguese ancestry is in the Central Valley, which spans 450 miles from Sacramento in the north to Bakersfield in the south and is one of the world’s most vital agricultural regions.

In the 1840’s, young men from the Azores Islands were hired on New England whaling ships that sailed to the California coast. With the Gold Rush in the 1850’s, sailors on whaling ships migrated to gold mining camps in the Sacramento Valley. Since gold mining didn’t always pan out many Azorean immigrants became shepherds. In 1876, the sheep industry failed and Azoreans migrated south to the San Joaquin Valley and began dairy farming. Families cooperated together in buying cows and land.

I discovered these facts at the Tulare County Museum of Farm Labor and Agriculture, located in Visalia, CA, which currently celebrates the cultural heritage of Portuguese-American dairy farmers in a free exhibit that runs until July 2013. The informative exhibit shows mounted photographs and glass cases of farming artifacts, milk and butter cans, and traditional festa clothing.

As I walked into the exhibit space, I was moved by bold personal reflections from immigrants posted on the gallery walls. Marie Macedo says, “I feel fortunate to live in the United States and yet it’s important to keep my heritage and Portuguese culture.”

The earliest photographs are dated from 1926 prior to the Great Depression. In a sepia toned photo, twins Joe and Mário Simões look directly at the camera, leaning on heavy wooden shovels while standing next to each other in cotton overalls and taut toucas. In another photo, Frank and Mary Souza work together plowing a field with a massive thick-veined draft horse.

These are the pictures of hard farm labor, days and months of toiling the land, plowing the topsoil, yielding sweat and aching limbs to the munificence of earth. On these faces are written the deep lines of self-sacrifice made for brother and wife, sons and daughters, who abide the toil after miles journeyed with homelands left behind them.

These are the hardened bodies that work the land–the faithful souls who preserve cultural traditions passed from one generation to the next. These are the faces of the past witnessed in the blood ties of the future. These are the faces of our ancestors who stood above the ground before they were buried beneath it, who felt the tears of hardship and the radiant joy of harvest wrought of honest work.

A 1926 panoramic photo shows the Borges-Souza Dairy Ranch in Visalia. Before paved roads, dirt-trod country lanes led to the dairy farm: two barns, a grain silo, and fenced in Jersey cows. Another photo, taken in 1929, features the prosperity of Joe Machado Silva’s family farm: a three-bedroom house with a yard and two Model T cars parked in the dusty foreground. Both vehicles are loaded with large urn-shaped dairy cans that were delivered to local businesses or residences.

In addition, the exhibit displays an antique item called a “milk chute,” which is a milk delivery cabinet that used to be installed on the exterior of people’s homes. The square-boxed metal chute has both internal and exterior doors, so milk customers opened the interior door and placed empty milk bottles or their order inside the chute. Then a milk deliveryman opened the outer door and filled the order by placing it inside the chute. The milk chute is a fascinating device of convenient customer service and it shows the innovative door-to-door service of local dairy entrepreneurs. Display cases exhibit various items of the dairy farm.

Visitors see vintage butter molds, butter churns, cream cans, cheese presses, milking benches, polished stripping buckets, and a tall Knudsen milk can. But what struck me most were items that preserved aspects of traditional Festa celebrations: a lace-fringed white wedding dress with matching gloves and rings. Memories of the Azores come to mind as we see floral printed aprons and a bead-studded purse. Wooden toys and craft items make you think of gleeful children who played in grassy yards adjacent to shaded barns.

Exhibit items come to life as many dairy implements can be seen in the photographs. In a milking stall, Agnes Costa sits on a four-legged stool, smilingly reaching under a Jersey cow to fill a 1923 DeLaval bucket with warm milk. Her hair is pulled back and she wears denim overalls and a cotton plaid long-sleeved shirt. Milking cows is the sturdy routine of a day’s work.

On the subject of young men laboring on the farm, Portuguese immigrant Tony De Millo says, “These teenage boys came from the Azores Islands…raised a family and started some kind of business but didn’t have a chance to go to school.” They worked hard for their families and loved ones and sent money back home. The division of labor on the farm establish equitable gender roles.

A striking photograph shows Azorean women Maria Costa, Agnes Costa, and Mary Leal standing together in a barn. Their hair is in the fashion of the day, curly and shoulder length. Over their stalky frames drape bloused work shirts stuffed into denim jeans that are rolled at the cuffs. They wear mud-clod men’s boots and their knees are worn and sodden from kneeling in wet soil.

All these years later, we witness their hands calloused from pitch forks and stone picks made to last. They labored to secure the financial well-being of their families. In their work, we sense their connection to a new land and their commitment to Azorean traditions. In dairy farming, they carried on the livelihood of their ancestors and the fervor of steadfast dreams.

Anthony Barcellos, author of the novel ‘Land of Milk and Money’ (Tagus Press), is from a family of Azorean immigrants in Tulare County, and he grew up on a dairy farm in Porterville. The protagonist in his novel, Paulo “Chico” Candido Francisco, is a Tulare County dairy farmer. The following excerpt from the novel gives readers a sense of lived experience:

Chico squatted down and dug his fingers into the soil, squeezing the clumps of earth, still slightly damp with the morning’s dew.He breathed in the wine-rich tang of living matter….Everyone would work nonstop until a break for lunch, following which the afternoon shift would begin. Cows need to be milked twice a day and their rhythms determined the daily routine on a dairy farm. And on a dairy farm, the daily routine applied to all seven days of the week. Cows did not take weekends off. In Tulare County, located in the Central Valley of California, Portuguese American farmers have built communities of hope on memories of home.

In Tulare County, located in the Central Valley of California, Portuguese American farmers have built communities of hope on memories of home.