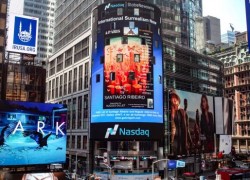 The art of Portuguese surrealist painter Santiago Ribeiro will be displayed openly at the Times Square’s Nasdaq OMX Group, in New York City.

His work will be shown daily, at random, alternately, lasting several minutes in each session, until December 31, 2017.

Based in dreams and visions, Ribeiro’s metaphoric surrealist imagery surprises, puzzles and triggers mixed feelings.  His paintings have been described as “complex compositions illustrating deep concerns about modern society and its individual and collective behavior.”

Born in Coimbra, Ribeiro attended art classes at the Escola Avelar Brotero and Escola Superior de Educação of Coimbra. He has organized and participated in numerous individual and collective art exhibitions in Portugal and abroad. His work is represented in several private collections as well as in the Collection of Contemporary Art of the National Museum Machado de Castro and in the Bissaya Barreto Foundation in Coimbra, Portugal.

In an interview for the Portuguese American Journal (2014), Santiago Ribeiro speaks of his development as a surrealist painter, Surrealism as an art form and his “International Surrealism Now” initiative.