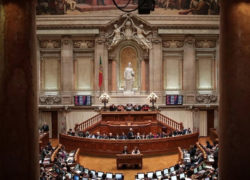 Portuguese lawmakers voted today in favor of a revised bill to legalize euthanasia and medical assisted suicide, through lethal drugs, to the terminally ill and seriously injured patients.

The bill, approved in a 138-84 vote with five abstentions, was sponsored by the ruling Socialist Party with the support of the left-leaning smaller liberal, political factions.

The Portuguese Constitution still requires the signature of Portugal’s President for the bill to become law.

President Marcelo Rebelo de Sousa, a committed Catholic and moderate center-right politician, is known to have deep reservations about signing the bill into law. He may send the bill to the Constitutional Court for review.

In March 2021, the President had vetoed the original bill, which was submitted to Constitutional Court for review. The judges rejected the bill in a 7-5 ruling because of what it said was unclear.

In a statement, the Constitutional Court deliberated that “the law is imprecise in identifying the circumstances under which those procedures can occur.” The court stated the law must be “clear, precise, clearly envisioned and controllable.” The law lacks the “indispensable rigor,” the judges deliberate.

Following the Court rule, the law was then swiftly vetoed by the President and returned to Parliament, where the ruling Socialist Party stated that it would reword the legislation and pass it again.

President Rebelo de Sousa had indicated that he oppose the measure on the basis of the law infringing Portugal’s Constitution, which states “human life is inviolable.”

In 2018, Portuguese lawmakers had reject a bill to legalize euthanasia and doctor assisted suicide for terminal patients, but a poll last year revealed that about 60% of the Portuguese population supports euthanasia legalization.

Euthanasia would be applied under strict rules, when freely and repeatedly decided by an informed adult, “in a situation of intolerable suffering, with extremely serious and permanent harm … or incurable and fatal disease.”

Accordingly, individuals over 18 years old would be allowed to request assisted suicide, if they are terminally ill and suffering from “lasting” and “unbearable” pain, except when mentally not fit to make such a decision. Under these conditions, patients seeking to terminate their lives will administer the drugs themselves, under medical supervision.

The process will only be open to national citizens and legal residents to prevent people from travelling to Portugal to get medical help to end their life.

If legalized, Portugal will become the eight country in the European Union to allow terminally ill patients to seek a medically assisted suicide. Several other EU countries have allowed euthanasia, namely Germany, Austria, Netherlands, Belgium, Spain, Luxembourg and Switzerland. Countries such as Ireland, Scotland, and the United Kingdom may follow.