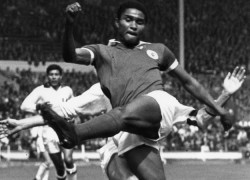 Eusébio, 71, one of the greatest soccer players of all time, died Sunday, at home in Lisbon, of heart failure.  After undergoing a heart operation six years ago, he had been admitted to hospital several times over the last year for heart and respiratory problems.

Eusébio da Silva Ferreira, known to his fans as the “Pantera Negra”  [Black Panther], was born in the Mafalala neighborhood of Maputo, Mozambique, when the country was still a Portuguese colony.  His father was Laurindo António da Silva Ferreira, a white Angolan railroad worker and his mother, Elisa Anissabeni, was a black Mozambican woman. He left home in 1961, aged 18, to join Benfica in Lisbon, Portugal.

Throughout his long sporting career, he liked to refer to himself as representing Africa and Portugal, which he considered his second homeland. Revered in the country of his birth as well as his adopted homeland, he was one of the first African-born players to make an impact on the world’s sports scene.  He will go down in history as one of the greatest Portuguese footballers and Africa’s greatest-ever soccer player.

“A football genius and example of humility, an outstanding athlete and generous man, Eusébio was for all sports fans and for all Portuguese an example of professionalism, determination and devotion to the colors of the national jersey and of Benfica,” Portuguese Prime Minister Pedro Passos Coelho said in a statement.

The President of Mozambique, Armando Gebuza, has also stated, “He’s a figure who has contributed to the deep and rich history of Mozambique. Eusébio came here from time to time. He always maintained a link with Mozambique. He’s a very well known and respected figure in our country.”

Considered one of the 10 best world players of all time, during his professional career Eusébio scored 733 goals in 745 matches, playing for Portugal’s Benfica and internationally for the Portuguese national team. With Benfica, he won 11 Portuguese league titles and 5 Portuguese Cups.  A bronze statue of him stands outside Benfica’s Estádio da Luz, in Lisbon, where his coffin was taken latter Sunday.

In 1975, Eusébio  moved to North America, where played for the Boston Minutemen, the Toronto Metros, the Las Vegas Quicksilver and the Buffalo Stallions. He finished his career at New Jersey Americans in the American Soccer League.

After a 22-year professional career, playing for nine clubs, he became an ambassador for Portugal, Africa, Benfica and Portuguese football. Eusébio is survived by his wife, Flora, two daughters and his grandchildren. Upon his death, Portugal has declared three days of national mourning with the national flag flying at half-mast.