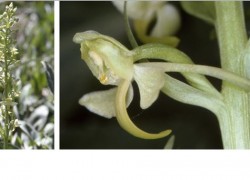 European botanists have rediscovered  the Hochstetter’s butterfly-orchid, one of Europe’s rarest orchid species, spanning all nine islands of the Azores.

The findings, published in the peer review PeerJ journal, explain how the rare species was found and confirm that the islands support three kinds of this rare orchid species, rather than one.

The flower was first found by German botanist Karl Hochstetter, when he visited six of the nine Azorean islands in 1838, and appeared illustrated in a 1844 journal.

The species now recognized was identified using modern data gathered from lab tests and other analytical techniques. The orchids may have originated from a single species that arrived by seed millions of years ago.

According to researchers “They are compared through detailed multivariate and univariate analyses with four widespread continental European relatives in the P. bifolia-chlorantha aggregate, represented by 154 plants from 25 populations, and with the highly misleading original taxonomic descriptions. Physiographic and ecological data were also recorded for each study population.”

“This remarkable species languished unrecognized for 173 years,” commented Bateman to the BBC. “It’s rediscovery and recognition beautifully illustrate the value of integrating field-based and laboratory-based approaches to generate a modern monograph. This methodology both demonstrates that the species is genuine and allows us to make informed recommendations for its future conservation,” he said.

Under threat in its mountain-top vulnerable environment, the Hochstetter’s butterfly-orchid needs immediate attention and recognition to survive extinction on the islands, researchers have recommended.