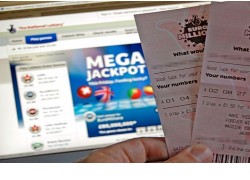 The odds were fairly slim, with any given entry having a 1 in 116.5 million chance of winning the jackpot. The result gave Portugal its fourth jackpot win of 2013.

There were five tickets that matched the main numbers along with one of the Lucky Star numbers, and each of those won their owners a second-tier consolation prize of €321,779.

Established in 2004, EuroMillions is a transnational lottery. Draws are held every Tuesday and Friday night in Paris, France. The player selects five main numbers which can be any number from 1 to 50 and selects two different “lucky star” numbers from a pool of 11 numbers.

Any person 18 or over, who resides in a participating country, can play. The game is currently available to players in Andorra, Austria, Belgium, France, Ireland, Isle of Man, Liechtenstein, Luxembourg, Monaco, Portugal, Spain, Switzerland and the United Kingdom.

All prizes, including the jackpot, are tax-free (except in Switzerland, Spain and Portugal since 2013) and are paid as a lump sum.