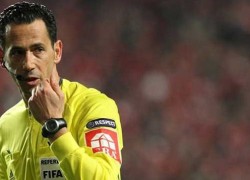 Proença had been appointed by UEFA to be in charge of this season’s UEFA Champions League final between FC Bayern München and Chelsea London at Allianz Arena, München, Germany, on 19th May 2012.

Born in Lisbon, Proença has refereed in the Portuguese Liga since 1998, and he was promoted to the FIFA international referees list in 2003. In December 2004, Proença officiated his first UEFA Cup match, the second leg of the first round tie between AEK Athens and Gorica.

Highlights of his international career also include last year’s UEFA Champions League semifinal at Old Trafford between Manchester United and FC Schalke 04 as well as the fact that he joins, as the only Portuguese, the 2014 FIFA World Cup Prospective List of Referees.