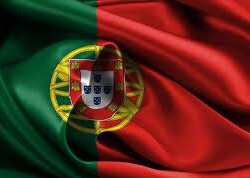 Returning Portuguese football squad members made no comment on arrival at Lisbon airport early Wednesday following their defeat by Denmark.

Cristiano Ronaldo scored a stunning free kick, but it was Denmark who beat Portugal to an automatic place at Euro 2012 with victory in Copenhagen. Denmark qualified for its seventh European Championship finals.

Portuguese team manager, Paulo Bento, was not seen as squad members left Lisbon airport in silence before returning to their clubs.

Denmark finished Group H on 19 points, while Portugal ended on 16 points. The Portuguese team must now win a two-legged play-off to determine whether they will be in Poland and Ukraine next summer.

Portugal will learn who their opponents are this Thursday in order to book their place at the Euro 2012 football championships after finishing only second in Group H.

They go into the hat as one of the seeded teams, alongside Croatia, the Czech Republic and Turkey, and will play one of Ireland, Bosnia-Herzegovina, Montenegro or Estonia.

The Euro 2012 football championships take place in Poland and Ukraine between June 8 and July 1 with the draw for the group stage taking place on December 2.