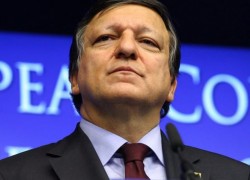 Barroso, a former Prime Minister of Portugal (2002 – 2004) will be leaving the office of European Commission President in October, after having served two full terms. He has held the post since 2004.

Barroso indicated that he supported the center-right Jean-Claude Juncker to replace him on the post, remarking that Juncker is an “excellent candidate” and “a person with great experience in policy at the European level.”

Juncker was also backed by German Chancellor Angela Merkel and her Christian Democrats. He beat French rival Michel Barnier, the EU’s financial services chief, by 382 votes to 245 at the European People’s Party congress in Dublin.

The European Parliament elections for the European Commission presidency will be held on May 2014. The choice of candidate has to be approved by EU leaders.

José Manuel Durão Barroso, 58, is the 11th and current President of the European Commission.