Essay: The Portuguese and the British in India – By George Monteiro 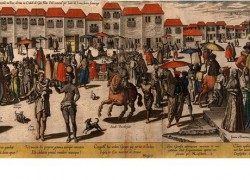 In 1924 Edward Morgan Forster (1879-1970), the author of such well-regarded early twentieth-century novels as Where Angels Fear to Tread (1905), The Longest Journey (1907), A Room with a View (1908), and Howard’s End (1910), published his much admired political-historical novel, A Passage to India.  Considered by most critics and literary historians to be his masterpiece, the book explores the contradictions and tragic consequences of British imperial rule in the Far East.  If the novel’s overall thrust is to criticize modern imperialism, it does so by offering a particularly trenchant criticism of Great Britain’s way of administering its far-flung Empire.

Two years before publishing A Passage to India, Forster was entrusted to review two books on “Luso-India.”  His combined review of The Book of Duarte Barbosa (Volume I), published by the Hakluyt Society, and History of the Portuguese in Bengal, by J. J. A. Campos appeared in the London journal The Athenaeum, no 4713, on August 27, 1920 (p. 268).  The Athenaeum, under the editorship of John Middleton Murry regularly published the work of writers such as T. S. Eliot, George Santayana, Aubrey Bell, Virginia Woolf, Katherine Mansfield, and Conrad Aiken.  The Athenaeum also published the poem “Meantime” (1920), which turned out to be Fernando Pessoa’s only British publication during his lifetime.

Forster’s review focuses on the ways in which English behavior and policies in the Far East can be contrasted with those of the Portuguese who preceded them as a dominant force in that part of the world.  He comes out largely on the Portuguese side.  To make his point and to establish the accuracy of Barbosa’s book he turns to what some readers might have seen as no more than a bit of curious information.

The betel is as broad as the leaf of the plantain herb and like it in shape.  It grows on an ivy-like tree, and also climbs over other trees, which are enveloped in it.  It yields no fruity box only a very aromatic leaf, which throughout India is habitually chewed by both men and women, night and day, in public places and roads by day and in bed by night, so that their chewing thereof has no pause.  This leaf is mixed with a small fruit (seed) called areca, and before eating it they cover it with moistened lime (made from mussel and cockle shells), and having wrapped up these two things with the betel leaf, they chew it, swallowing the juice only.  It makes the mouth red and the teeth black.

“No one could describe betel like this who had not chewed it personally,” insists Forster, drawing a moral, “and it is here that Barbosa has an advantage over our own officials to-day.”  For these British officials would “never chew betel—it would not be pukka [not classy, not fitting]—and to them that one has chewed it oneself requires moral courage.  They are in India not to live but to rule, and in consequence their experiences are curtailed, and their powers of observation atrophied, whereas Barbosa, less conscious of his destiny, could share the life of the people.”  Forster then turns to Campos’s book, anticipating by several decades the similar notion of a more democratic “Luso-Tropicalism” championed by the highly influential Brazilian anthropologist Gilberto Freyre, “The Portuguese (as Mr. Campos points out in his painstaking monograph on Bengal) had, indeed, little ‘egotism of race’ and readily consorted with the indigenes.  Most of the Eurasian population of to-day descends from them, and the Goanese waiters on a P. and O. [a ship of the Peninsula and Oriental Steam Navigation Company], all so black and so similar, but all Roman Catholics, are the results of the enterprise that began in 1498.”

Forster concludes with a capsule history of the Portuguese far Eastern empire said its demise:

With Ormus and Goa as two pillars of their power and Malacca as the third, the Portuguese ran up a vast but temporary Empire, which trimmed the Indian coast and even extended to China.  It stood so long as they commanded the seas, and so long as India did not gather herself together, and shake the intruders off her hide.  The seas were lost to the Dutch and the English at the beginning of the seventeenth century; India gathered herself together under the Moguls. Under the double attack the Portuguese Empire fell, having flourished for scarcely a century, and leaving behind it an impression that is rather difficult to analyse.  It is not heroic, despite the epic of Camoens.  But it showed Europe how the farther east might be exploited, and how, by circumnavigating the barrier of Islam, new markets might open for the missionary and the trader. The other nations learned the lesson, we most fully of all and our Raj [the British rule of the Indian subcontinent] to-day is an immense expansion of the principle of trading-ports introduced by Albuquerque.

As for the Raj’s future, Forster offers no prognosis.  He saved predictions and warnings for A Passage to India, the last novel he published during his lifetime.  On the last page of that novel the Indian Dr. Aziz cries out in anger: “Down with the English… Clear out, you fellows, double quick, I say.  We may hate one another, but we hate you most… if it’s fifty five-hundred years we shall get rid of you, yes, we shall drive every blasted Englishman into the sea…”  As History would show, it did not take nearly that long to send the Brits packing.