Memoir: “Love Makes the Meal” – A story on growing up Portuguese – By Marielena Dias 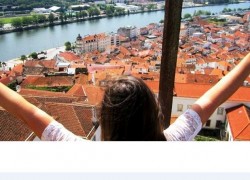 Here is a story I wrote a while back, but never thought to share until today… I entered this story in a competition and won a partial scholarship to attend a literary conference in Lisbon, Disquiet International, but sadly I couldn’t attend. Enjoy!

One summer, before my 13th birthday, my parents and I took a 10 hour flight from Florida to mainland Portugal to join my family in Carregal do Sal (district of Viseu). A few days after we got settled into our summer abode, we joined our extended family in one of their busy afternoon meal preparation scrambles. As a tradition, on hot scorching days, after working all morning in their ancestral farm, my Portuguese relatives like to gather together for lunch to talk about what they did all morning.  That day, cries of “Tio Carlos, onde estão as pinhas?” (Uncle Carlos, where are the pine cones?) and “Estou  a acender o fogo já!” (I’m lighting the fire already!) filled the air, while my dad and cousins lit two pine cones and a few charcoal bits under a meat grill top, which had been suspended above the cement patio floor by two metal prongs. That particular afternoon, we were roasting and feasting on sardinhas.

For as long as I could remember, seafood had never appealed to me. Once, when I tried sardines at the age of six, its taste was so unappetizing that after that day their salty, fleshy smell made me gag. The minute I learned what was on the menu that afternoon, my appetite was instantly curbed. However, watching the men in my family prepare the sardines was a sight to see, and thus I was entertained watching the spectacle. They all took turns flipping the sardines with such ease, and the flames were dancing about, licking the sides of the sardines until their skin was flaky.

In the house of my cousin we were staying with, the outside walls lay adjacent to the houses on either side. Yet from the garage, there is a path that connects the house to my uncle’s, which is next door. Along this cement path, which is obscured by the houses behind ours and by fruit trees from my neighbor’s farm, a patio lies between the house and my uncle’s house. The cement path then slopes upward, in the form of narrow, winding steps. Those steps have been tread upon by many relatives, and were probably only comfortable for my deceased grandmother, whose dainty feet carried her up and down on those sweltering evenings decades ago, when she would hand wash her garments on the wash board and hang them to dry outside her window. It was in the patio that the men congregated to roast their tasty sea treasures, their conversations based on how well the fish were biting and how tall the children had gotten. 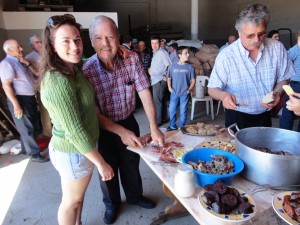 Over the centuries, the Portuguese culture has been generally known as one that relishes in the art of fishing and preparing seafood. From birth, boys are aware that at some point in their lives they will fish for a meal, much like our ancestors did thousands of years ago. Upon reaching an age where they can stand, the boys are taken on long fishing trips with their fathers, and taught the art of catching a fish, whose scales glitter in the sun like a million silver coins when they are pulled from the murky depths where they lurk. The women and girls, on the other hand, prefer staying indoors and making bread than being sprayed by the salty waves inside a small, cramped fishing vessel.

It was indeed this task that my aunts were performing that afternoon. Underneath the cement steps, in a hidden room designed to be a summer kitchen, I found my aunts huddled around the oven, baking broa (cornbread). The whole scene was rather comical; a pear shaped clay oven, which was tall enough to reach the ceiling, was spewing wispy white smoke while my aunts, all of them decked in yellowed, traditional aprons, fed it thick, square chunks of traditional corn bread (made from the corn they had grown that season).

“Já acabaram as sardinhas filha?” (Did they finish the sardines already daughter?) was my greeting as I entered the door from Aunt Margarida. Shaking my head no, I sat in one of the many tan wood chairs, all of which complimented the wood table, where a festive blue and white checkered, plastic tablecloth covered the surface. My aunts all went back to baking their bread, sharing stories of their morning and of breakfast as they molded the dough. Their conversations were a flutter of Portuguese, full of tidbits and gossip they had heard that day. As they pressed the golden-brown corn cubes together, my older female cousin Dulce sat stirring deep cauldrons full of boiling potatoes that would later be drizzled with oil to accompany the sardines. Every now and then she would push her haphazard curls out of her face. Occasionally, she would pause to rest her arms, smile at the other women, and wink at me.

The salty smell of the greasy sardines drifted into the kitchen, a sign that the salting of the sardines was taking place and that they would be done soon. Eager to leave before the meal started, I darted out of the kitchen and up the cement steps into the top floor of my uncle’s house. On this floor, my grandmother used to spend quite a lot of time. From the top floor a kitchen door led me to the final bit of the cement path, which wraps around the top of the house like an old, unprotected stone path that once wound around a castle tower. After working my way well around the outside of the top floor, the cement path stopped suddenly and I found myself suspended several feet above the patio, which was directly beneath me. Here, I sat down, my legs dangling above the activity involved in preparing the sardinhas. My family moved like ants, darting here and there, crying out occasionally when the bread had burnt or when a gust of wind filled the fire with life, and it softly roared, showering the sardines with orange and yellow sparks. 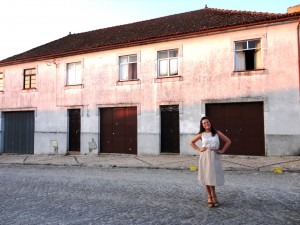 At home in Carregal do Sal

For decades, the three adjacent houses on the end of the street, Rua da Estação (literally meaning “Road of the Station” because there is an abandoned train station at the end of our street) have been part of our family history. Countless guests, relatives and Portuguese people have been born, visited and passed on in these houses. My father, for example, and his siblings were all born in the big house to the right of the one we were staying in, while my older male cousins grew up in the house to the left. In fact, the house we were staying in was once an abandoned kitchen that belonged to my grandmother, but my father and his brothers knocked it down to build a small breezy home where family members come and go.

I sat on the cement ledge and watched the sun hide behind the top floor of the house. I thought about my grandmother. Avosinha (grandma) Herminia died years ago from Alzheimer’s disease, before I met her. Many of my relatives tell me I remind them of her, whenever we get the chance to visit Portugal and see them. My grandmother put love into all her meals, and into everything she did. At times my father remembers her docile, forgiving ways and how she was stern, yet wise in all of her decisions. She loved having the family together for meals, when the love she put into her food would nourish the souls of her family, and the food itself would help her family members grow stronger.

“Oh Lenita, onde foste?” (Lenita [my childhood nickname], where did you go?) I ran back around the path, down the steps and made a flying leap onto the patio. My brawny, sweet tempered older cousin, Nuno, ruffled my hair and playfully pulled me by my collar into the kitchen under the steps. All of my relatives, proud of the meal they had created, sat at the table. They passed each other dishes of food and began loading their plates with the fruits of their labor. Looking around me, I saw the beautiful faces of my Portuguese relatives, all bearing a resemblance in some way. Ten tanned faces, with dark eyebrows and brown or hazel eyes looked back. They all knew what was coming in a few seconds.

A chipped, ceramic dish was placed in front of me, where a single sardine lay staring at me with its dead, cold, fishy eye. All of my relatives watched me with curiosity and humor as a piece of the flesh was sliced from the sardine and exhibited on a fork in front of my nose. I carefully put the sardine in my mouth and found, much to the satisfaction of my family members, that it was not as disgusting as I had imagined it would be.

Perhaps it was the fact that earlier, when the men had set up the fire, they let me light the pine cones and charcoal. Or the fact that I had helped prepare the salad (Portuguese style, with nothing but olive oil and salt). It could have even been the after-lunch dessert, which consisted of fresh fruit that we had picked earlier that had been cleverly cut up and served with fruit juice for a cool treat. At some point that afternoon, I learned that while food may be prepared with a multitude of spices, vegetables or sugars, the key ingredient is love, and family. That afternoon, the sardinhas didn’t make me want to retch, and I had enjoyed the presence of my family preparing a meal together. Surrounded by the love of my relatives and the harmony of our family, I didn’t mind what was being served, so long as we had an interesting conversation going.

It was for this reason that my grandmother put so much effort into her meals. She knew that while ingredients make food, togetherness makes a meal. Her tradition was one that I one day will be proud to carry on. Be it a Portuguese, Chinese or African custom, what’s true is that I tried to proudly eat a sardine not too long ago at a Portuguese-American restaurant here in the U.S., and it made me gag.

(*) Marielena Dias is a Portuguese-American graduating senior at the University of Florida. She is majoring in Political Science with two minors- one in European Union Studies and the other in International Development and Humanitarian Assistance. Marielena’s main passion is research (her research interests include Portuguese identity in Europe, Portuguese colonialism, European identity and politics, and identity formation and politics), and it was through research that she began returning to Portugal in the summers during college. Marielena is also passionate about international education development, working with students, and the development of the Lusophone community worldwide. At the moment she is an intern with the National Organization of Portuguese Americans working on a self-designed project to bring more Luso-American students to Portugal. She would like to get a Master’s and Doctorate degree in Development. Ultimately, she would like to become a professor researching Lusophone topics and working with Lusophone students in an effort to attract them to fulfilling academic pursuits in Portugal. Marielena Dias was born and raised near St. Augustine, Florida, but she plans on living in Portugal in the near future. Last summer, she began a blog: http://diasemlisboa.wordpress.com/ where she writes about the experiences she encounters as a Portuguese-American in Portugal and shares cultural tidbits that she learns on her visits.