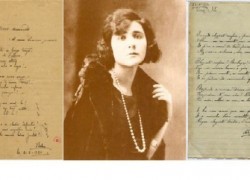 This essay by George Monteiro will preface Our Book: Translations of Florbela Espanca: Selected Poems, Billie Maciunas’ book, which at this time is unpublished.

In the scheme of things, however else it may work, translation functions as an act of generosity. Specific and meretriciously individual motivations notwithstanding, a translation cannot help but stand as a contribution to humane and therefore humanist experience. All translations carry words and sentences, prose and poetry, over into new territory, cross otherwise fixed and exclusionary borders. Now, for the first time, for example, we have in Billie J. Maciunas’ fine English translations [1] an ample selection of the great poet Florbela Espanca’s “perfect sonnets,” poems that Presença’s writer-critic José Régio numbered among the very “best sonnets” in the Portuguese language. [2] Long and lovingly in the making, Maciunas’ book marks an important milestone, one well overdue, in the making of Florbela Espanca’s literary reputation outside of the Luso-speaking world. No doubt, Espanca’s poetry matters.

It’s as if the poet validated her work and her existence when on her thirty-sixth birthday in the place of her birth she took her own life. Three decades later, in her thirty-first year, Sylvia Plath also committed suicide. It was in 1930, two years before the American poet was born, the controversial Florbela Espanca, a decidedly controversial and much maligned figure for her explicitly sensuous and sexual poems, fulfilled her life of despondency and depression by ending it on terms that brought validity and verification to the sentiments, feelings and always disappointing quests for love that were impossible in earthly, flesh-and-blood terms and thus ever denied.

Of course it was her insistence on her human right to be a human being and not a rights-restricted woman of her time, especially one whose necessity was to recognize her singular view of spirit and body, soul and sexuality, singular in its emphasis and expression for her time and place, that made her a pariah among Portuguese critics and other readers of poetry. In America only Emily Dickinson had broached these truths, but, as she advised, the poet should tell the truth but tell it slant. And after Florbela, though they were of course ignorant of her own spiritual-sexual odyssey, Edna St. Vincent Millay, who could count on the approval of a vigorous and greatly influential avant-garde—something that was not available to Florbela—as well as Sylvia Plath, Anne Sexton or their many followers over the past half-century, who needed no support from an avant-garde to exercise the right of any woman to express directly, in undiluted fashion, her sexuality.

Born on August 12, 1894, in Vila Viçosa, among the sparsely populated spaces of the Alentejo region, far from the madding crowds of Lisbon and Coimbra or Porto, the poet Florbela Espanca had no predecessor in Portuguese letters—her poetry no precedent among women poets—even if one counts Mariana de Alcoforado, the so-called Portuguese nun credited by many with having written in the late seventeenth century the famous (if not infamous) Lettres Portugaises. It would take an extensive and elaborated study of social and historical psychology to disentangle and understand Portugal’s Janus-like involvement with the matter of these letters, a work now pretty much accepted as having been written in French by a French writer and not by any Portuguese writer, nun or not. Of course, that Florbela knew the “letters” is undeniable, but that they offered precedent and license for her own poetry is only slightly less evident. The Portuguese nun’s letters are unanswered, while Florbela’s own “letters” (her poems) are both unanswered and, her own ever evolving discovery, unanswerable—certainly not in this life. If Dickinson could write of her poetry “This is my letter to the world that never wrote to me, Florbela early on discovered that there was no one to write to her. Closer to the seventeenth-century Portuguese nun, she also refers to herself as not only “Irmã” but, tellingly, as “Sóror Saudade”—as in “Sóror,” the putative author of Lettres Portugaises.

“Out of your pain, make a poem,” so runs one version of the ancient adage. But many critics or most readers were not always ready to grant Florbela this right or to countenance in any way her rightful opportunities to do so. To grant her this would be to grant that her poems were autobiographical. Given the sensual nature of her poetry (so readily acceptable in the poetry of the male St. John of the Cross [San Juan de la Cruz], for instance), it was largely dismissed as insincere. (So, too, for that matter, were the love sonnets of Edna St. Vincent Millay, in another country and a few years later.) And if they were autobiographical (and thus sincere, or even bordering on the sincere), then the sensually confessional nature was entirely out-of-keeping with the truths about womanhood that Portuguese society insisted upon. [3] It was, of course, a matter of public morality. As the discerning critic Jorge de Sena says in his foundational essay on Florbela in 1946,

Towards the end of the Portuguese nineteenth century and in the early decades of this [the twentieth] century, many women wrote, and in the main they were poetesses, manifesting (predominantly in the sonnet) the sorrows of love. But that there were rigorous limits placed on these “confessional” expressions manifests itself in the shock waves caused by Florbela Espanca’s eroticism. That is, Portuguese society, which was more open than protestant and puritan societies to the woman’s ascendance to a certain independence… would not accept the idea that the woman was the sexual equal of the man. From this the decision of another great writer, Irene Lisboa, whose erotic relationship with her lover she felt much freer to express than was Florbela to express incestuous sexuality, to employ a reticent irony, and to confine herself to an ardor that disperses itself between detachment and solitude. [4]

Almost a casual throwaway in this account of the Portuguese double standard regarding sex is the word “incestuous,” but “incest” is at the heart of the matter. It refers to the way in which the poet’s scabrous reputation was constructed out of the presumed details of how Florbela as a woman was living out her life. That reputation, of course, was used against her, both as a woman and as a poet. The Portuguese public, believing that she and her brother constituted a case of incest—“I was in life the sister of one Brother only / And now I am sister to no one!” (“Eu fui na vida a irmã dum so Irmão, / E já não sou a irmã de ninguém mais!”—“In Memoriam” dedicated “to her dear dead one” (“Ao meu morto querido”)—nevertheless still managed to continue to believe that her poetry, factitious and thus inauthentic, could not be, in any way, sincere. Of course, as her champion in 1950, José Régio (the famous co-editor of Presença, who also tried to tell the secrets of his own heart in his work but always managed to get away with it by telling them, as Dickinson advised, “slant”) tried to define her bodily-spiritual searching, not merely described in her work but incarnated in it, as an essentially universal quest, one that, in her case, was tragic and doomed to fail. Incidentally, if, a generation later, Irene Lisboa (who until the 1940s published major work under the masculine pseudonym “João Falco”) was “freer” than Florbela to express her eroticism, it is no stretch to credit her predecessor with having first broken through the mindless and senseless barriers to such expression by any poet, man or woman, in a voice that continues to surprise by its power to evoke aesthetic pleasure, nearly a century after its truths first shocked the Portuguese reader.