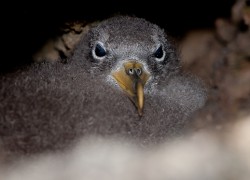 This Tuesday, the population of the Azores will participate again in the “SOS Cagarro” initiative, a program aimed to preserving the Cory’s Shearwaters species which nests in the Azores. Launched in 1995, the “SOS Cagarro” is the largest environmental protection program in Portugal.

“Cagarro” is the Portuguese name for the Cory’s Shearwaters (Calonectris diomedea) a bird of the albatross family named after the American ornithologist Charles B. Cory.

About 75% of the world’s population of Cory’s Shearwaters nests and breeds in the Azores, home to over 200 thousand couples during the nesting season.

The program, which runs from October 15 to the end of November, involves the population on the nine islands, by alerting the population to rescue young birds of the species that fall from nests.

Last year it was estimated that 3.233 birds were rescued in the Azores. A total of 169 organizations and 4.706 volunteers were involved in the rescue program.

The event is celebrated across the archipelago with several educational activities. Schools receive “SOS Cagarro” kits and nature watchers teach children how to handle the birds.

The Cory’s Shearwaters is a true seabird which spends most of its life at sea.  With a long lifespan they feed on fish, mostly squid and offal, for which the bird may dive to a depth of 15 meters in pursue of the prey.

They come ashore to breed in late summer. November coincides with the departure of young Cory’s Shearwaters from their nests to their first transoceanic flight. Most birds migrate into the Atlantic as far north as the south-western coasts of Great Britain and Ireland.

Like most seabirds Cory’s Shearwaters have a very stiff-winged flight and surf on the winds just above the waves. The days are spent feeding out at sea, and the nights at the nesting site which is often the same site year after year. It will take some years before they return to the breeding site to find a partner and mate. Read more…